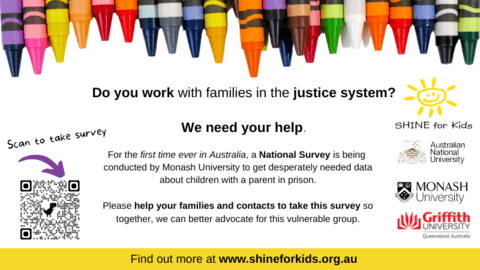 An Australian-first survey is seeking to better understand the issues confronting the children of parents in the prison system. Developed by Monash University, in conjunction with Griffith University and Australian National University, and supported by SHINE for Kids, the survey is open now until the end of December.

SHINE for Kids, the national charity supporting children and young people whose parents are in prison, said the national survey will play a crucial role in developing a broad snapshot of children and families and understanding the gaps in support for these children.

If you work with families in the justice system, please encourage them to take the survey and support them with it (available in multiple languages including English, Spanish, Cantonese, Mandarin, Vietnamese, Arabic and Samoan) so they can make their voices heard.