A century of mining in Australia

At the time of Federation, the mining industry was well established in Australia; many of the deposits being mined had been discovered 40 to 50 years earlier. Gold was the main mineral commodity, accounting for three-quarters of the total value of metalliferous mine production, with copper, lead and silver accounting for most of the remainder.

Although the mining industry had prospered in the early years of Federation, it was severely affected by the collapse of metal prices after the end of World War I. Many mines closed, and the value of mineral exports fell from $15.3m (in today's prices) in 1919-20 to $7.6m in 1921-22. The Mount Isa silver-lead-zinc deposit was discovered in 1923, and mining and smelting commenced in 1931. The existence of copper at Mount Isa was known from this time, but the copper lodes were not defined and mined until World War II.

Petroleum (which includes crude oil and natural gas) had been sought for many decades, but it was a latecomer to the mineral production scene in Australia. In 1900, at Roma in Queensland, natural gas was encountered in an artesian water bore which was being deepened. Gas continued to flow freely from the well, and in 1906 it was reticulated for town lighting (however, the flow failed just ten days later). This discovery marks the real beginning of petroleum exploration in Australia. Many wells were drilled subsequently in the Roma region. Some encountered quantities of oil and gas. In 1924 the first discovery of crude oil was made at Lake Bunga No 1 well near Lakes Entrance, Victoria.

The Depression in the early 1930s saw coal production fall by a third from a mid-1920 high of 14 million tonnes. Exports of coal, which had exceeded one million tonnes a year until the mid 1920s, had fallen to about 50,000 tonnes by the late 1940s due to increasing competition from petroleum products, which began to replace coal in industry and railways. This trend was exacerbated by prolonged industrial unrest.

In the late 1930s the mining industry, although well established, played only a minor role in the Australian economy. The need for new ore reserves of many minerals was the major concern of the industry in the late 1930s and early 1940s. Indeed, the paucity of new discoveries, after the flood of the previous century, had led some to the belief that there were few new resources to be found, and that the industry would gradually run down. In 1938 the Commonwealth Government placed an embargo on the export of iron ore, when reserves of high grade ore were believed to be no more than 260 megatonnes.

World War II brought the need for metals for the war effort; this gave rise to the realisation that Australia needed to have a greatly increased knowledge of the geology of the continent. The Bureau of Mineral Resources was subsequently formed by the Commonwealth Government in 1946. The resulting systematic geological and geophysical surveys across the continent and the increasing focus of State and Northern Territory Geological Surveys on mineral resources were important reasons for the surge of mineral discoveries from the late 1940s.

Mineral explorers were able to search more efficiently by using geological maps and theories on the origin of mineral deposits to target specific areas for exploration. The better understanding showed also that Australia had a high potential for the discovery of many styles of mineral deposits.

This realisation, together with Australia's political stability, led in the early 1960s to an influx of major overseas mining companies bringing with them new expertise and ideas, in addition to increasing exploration expenditure. The discovery of new ore bodies was also greatly aided by the development of geochemical and geophysical exploration methods suited to Australian conditions. Many techniques developed in the northern hemisphere were not successful in the arid, deeply weathered terrain characteristic of most of Australia.

The economics of working some previously uneconomic deposits changed remarkably because of technological advances which lowered the cost of mining and transporting huge quantities of material, but these advances would not have been decisive without the general expansion of the world economy in the 1950s and 1960s, and in particular the emergence of Japan as a major buyer of coal, iron ore and bauxite.

In the 1950s the mainstays of the industry were lead, zinc, copper, gold and coal, of which only the first four were exported in any quantity. Uranium was discovered in 1949 and mining commenced in 1954 at Rum Jungle in the Northern Territory. In the mid-1960s, the Australian mining industry began to expand, with growth in both production and exports combined with a change in relative importance of the various commodities - gold and base metals declined, while coal, iron ore and 'other minerals' increased in relative terms. By the late 1960s Australia was a world force in black coal, bauxite, iron ore, nickel, manganese, titanium and zirconium.

A major expansion of Australia's aluminium industry followed the decision to mine bauxite in the Darling Range, Western Australia, in the early 1960s. The perception that high grade iron ore resources were limited in Australia was turned around with the discovery of vast resources in the Pilbara from the mid-1960s. A five year nickel exploration and discovery boom in Western Australia in the late 1960s set Australia on the path to becoming a major nickel producer for domestic and overseas markets.

In the early 1970s indications from exploration for oil were that onshore oilfields probably would be small and unlikely to be economic. However, the oil shocks of 1973 and 1979, when oil prices increased severalfold, completely changed the economics of the industry. Expenditure on exploration increased rapidly, from $49m in 1976 to $948m in 1982. Some known fields were developed, such as Palm Valley and some Bass Strait fields, and many new fields were discovered, especially in south-west Queensland and the adjoining part of South Australia.

The exploration success in the Gippsland shelf also turned attention to Australia's extensive continental shelf, and the first of the huge gas fields of the North West Shelf were discovered in 1971. The emergence of large markets for coking coal, particularly in Japan, together with the realisation of the economic importance of near-surface coal seams in the Bowen Basin in Queensland, meant that coal exports increased rapidly from the mid 1950s and received added impetus with the oil shocks of the 1970s.

In the late 1970s the rate of growth of the mining industry in Australia, which had been maintained for more than 15 years, began to slow. New mines had been developed around the world to meet a forecast demand for minerals, which turned out to be overly optimistic. The Australian industry's costs had increased but mineral prices generally had not. The industry was largely dependent on exports and had to compete for sales with an increasing number of mines in other countries; some of these mines were less affected by cost increases, or were assisted in various ways by the governments of those countries.

Many new coal mines were established in Australia after the second oil shock in 1979, but world demand stagnated, leaving the industry in Australia (and the world) with substantial surplus capacity. Metal prices failed to increase in line with the world economic upturn in the early 1980s, and few new metal mines were opened. Australian production increased largely because of capacity increases at existing mines to achieve economies of scale.

By the mid-1980s one of the few bright spots in the Australian mining industry was gold. Because its price had been fixed, gold was largely ignored in the expansion of the industry after World War II. Interest revived to some extent when the price was freed in 1968, and strengthened with increasing confidence that the price increases of the late 1970s were likely to be sustained.

Other factors heightened the interest in gold. There was the development in the early 1980s of the efficient carbon-in-pulp method for recovering very fine-grained and low grade gold. This, and other developments with mining equipment, meant that it was now economically feasible to mine, by open cut or by underground methods, entire zones of gold bearing veins (whereas in the past only the main veins themselves would have been mined). So another gold boom emerged in the early 1980s. Australian gold production multiplied from 18 tonnes in 1981 to 57 tonnes in 1985.

The 1980s also saw increased vertical integration in the mining industry, most notably the processing of Australian bauxite to alumina and aluminium. This was a springboard for growth of some regional centres, such as Gladstone in Queensland.

The Timor Sea became a focal point of petroleum exploration from 1983 when the Jabiru oil field was discovered. In 1986 this field became Australia's first production project based on floating production, storage and off-loading technology. The North West Shelf, in addition to supplying Western Australia, began a liquefied natural gas export project in 1989. In 1985, 96% of Australia's crude oil requirement was met by domestic production. Since then, however, oil self sufficiency has been declining slowly as demand has increased.

The 1990s were another period of change for the mining industry - a period of consolidation with considerable focus on further improving efficiency and safety of operations and movement towards 'globalisation'.

The economic crisis in Asia in the late 1990s reduced demand for many mineral commodities and fuelled further declines in metal prices. Again, Australian companies increased production of metalliferous commodities. With abundant production from other countries, this exacerbated over-supply and maintained downward pressure on metal prices. Despite far-reaching changes in world mineral production and consumption patterns and the financial crisis in Asia, the mineral industry was able to retain its role as a major source of export income for the Australian economy.

For gold producers, significant central bank selling in the late 1990s (notably in Australia, England, Russia, Malaysia, Lebanon, the Netherlands, Jordan and Canada) was another burden that led to price falls and diminished the role of gold as a national reserve asset. This contributed to the closure of some high cost operations.

At the end of the century Australia had become a major world producer and exporter of coal, iron ore, bauxite, alumina, diamonds, gold, nickel, copper, lead, zinc, silver, mineral sands, manganese ore, uranium and tantalum. Minerals and energy were the largest commodity export by value in 1998-99 at $39.2b, exceeding agriculture ($22.4b). Mining-related intellectual property was worth $1.2b in 1998-99 and was Australia's fifth biggest mineral export, behind coal, gold, aluminium and iron ore. This intellectual property includes geophysical and mining instrumentation, software and processing chemistry, mine site rehabilitation, engineering, and other world-class Australian technologies. The minerals industry contributed 36% of Australian exports of goods and services in 1998-99.

Australia had the world's largest economic demonstrated resources of lead, mineral sands (alluvial ilmenite, rutile and zircon), tantalum, uranium, silver and zinc. It also ranked in the top six countries for economic resources of black and brown coal, bauxite, copper, cobalt, diamonds, gold, iron ore, manganese ore and nickel. There were more than 400 medium- to large-sized mines in Australia, including mines in world-class deposits of most major, and several minor, mineral commodities.

Indigenous history of the Pilbara

Launching the ship: a constitutional history of Western Australia

Too much of a good thing? The macroeconomic case for slowing down the mining boom

The costs of conflict with local communities in the extractive industry 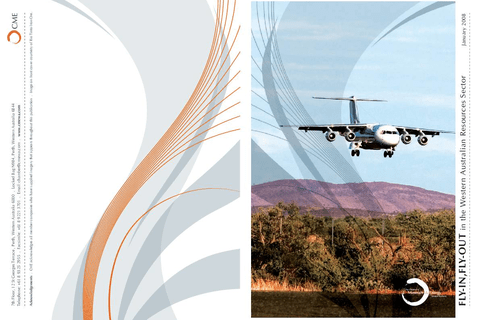 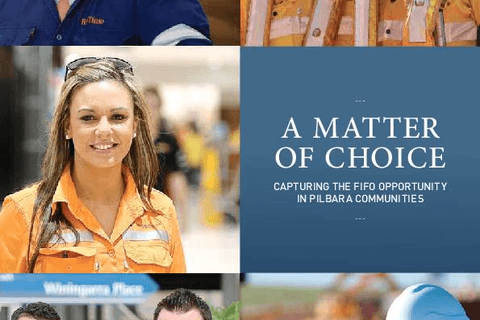