This resource contains information about suicide which may be upsetting to some people. 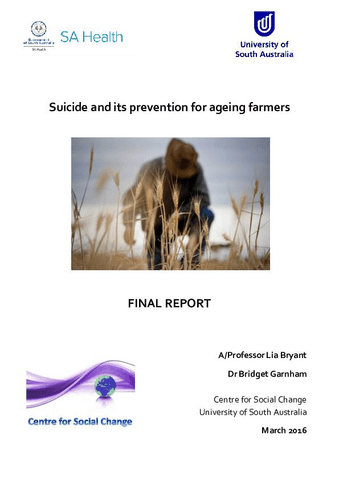 Deaths by suicide for farming men and women have a huge impact on the family and rural and agricultural communities in which they occur. The disproportionately high rate of farmer suicide has not declined in Australia even though as a community we have known about this problem for many years (Guiney, 2012; Judd et al., 2006; Page & Fragar, 2002). News of farmer suicides has reached media forums and reports, there has been a Senate enquiry into suicide and there have been studies and intervention programs focusing on rural suicide. Yet the number of farmer suicides is not reducing.

Australian farmers are ageing, in terms of both individual ageing and population ageing. The mean age of farmers in Australia is 58 years and farmers are more likely to continue working well beyond the age at which most other workers retire (Gullifer & Thompson, 2006; Polain, Berry, & Hoskin, 2011). In 2011, almost a quarter (23 per cent) of farmers were aged 65 years or over, compared with just 3 per cent of people in other occupations (Australian Bureau of Statistics, 2012). Indeed, agriculture has the oldest workforce in Australia (Rogers, Barr, O’callaghan, Brumby, & Warburton, 2013). Older male farmers are potentially the group most at-risk of suicide. This is difficult to ascertain however, given that disparate statistics, research and literatures on suicide present only a fragmented picture, in relation to intersections between age, gender and occupation. The rural studies literature reveals that farmers are disproportionately at risk of suicide (Guiney, 2012; Judd et al., 2006; Page & Fragar, 2002), the literature on older people and suicide reveals that this age group has the highest suicide rate (Conwell, 2001; Fung & Chan, 2011; Haag Granello & Granello, 2007; Harwood & Jacoby, 2000; Manthorpe & Iliffe, 2011; O'Connell, Chin, Cunningham, & Lawlor, 2004) and the literature on gender and suicide reveals that in general the rate of suicide for men greatly exceeds that of women (Canetto & Cleary, 2012; Canetto & Lester, 1998; Coleman, Kaplan, & Casey, 2011; Ní Laoire, 2001; Rutz & Rihmer, 2007; Synnott, 2009). Reading across these literatures suggests that being male, older and a farmer constitute an amalgamation of high risk for suicide (Garnham & Bryant, 2014).