In the light of this shift, Shelter NSW engaged the City Futures Research Centre to identify the major challenges confronting lower income and vulnerable residents in higher density housing. Shelter NSW is concerned to explore and highlight how contemporary urbanisation processes disproportionately affect more vulnerable social groups. These reports provide a summary of the research evidence currently available to answer these questions, as well as an indication of the gaps in evidence.

The trend towards higher density housing can bring both benefits and challenges, which are quite different to those associated with low density, suburban development. These differences are apparent at various scales. In higher density buildings (‘the building scale’), factors like proximity between residents, and the need to share responsibility for building upkeep, create a different living experience to that of detached housing. In areas with growing quantities of higher density housing (‘the neighbourhood scale’), this densification can strain local services and reshape the area’s socio-economic mix. And in cities that have embraced the ‘compact city’ model (‘the metropolitan scale’), this policy objective puts pressure on governments to coordinate infrastructure planning and delivery, and to manage the social, economic and environmental effects of changing population patterns and urban form. Many of these issues impact residents across the income spectrum but different socio-economic groups have different resources available to respond to these pressures.

However, as a rule of thumb we consider the following definitions to be useful:

• ‘lower income households’ refers to households in the bottom two income quartiles (earning less than $649 per week in NSW); and

To decide which issues should be covered in the reports, a workshop was held with key stakeholders from across the housing sector. This workshop identified the major issues facing lower income and vulnerable residents at the building, neighbourhood and metropolitan scales. These reports are written with these key issues in mind, while drawing upon the existing research evidence. While much of the report material focuses on the NSW policy context, many of the issues raised are equally relevant across Australia and around the world.

The first two reports have focused on the building and neighbourhood scales to explore specific issued face by lower income and disadvantaged households living in higher density dwellings. This final report focuses on policies, processes and economies that operate at the regional scale and their impact on lower income and disadvantaged households. It considers policies that affect the structural features of housing markets, policies and investment affecting urban regions, and the governance arrangements that influence the function of cities. This entails consideration of the activities of State and Commonwealth Governments in affecting the conditions under which housing is provided in Australian cities, with particular focus on Sydney. There are three key metropolitan scale processes that have further entrenched disadvantage in some communities: 1. The socio-spatial polarisation of wealth and opportunity over the past three decades. 2. A commitment to neoliberal approaches to urban and housing policy. 3. The unaffordability of urban housing markets, further accentuated by a lack of affordable housing. 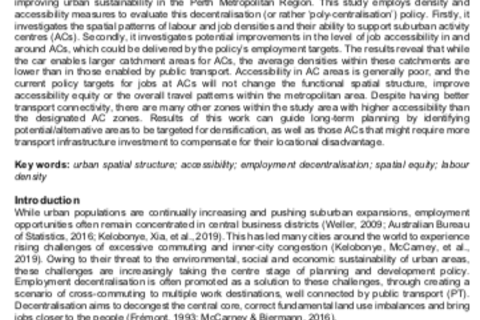 Reshaping the suburbs: designing for the ‘missing middle’