The primary purpose of the present research was to investigate the participation motivation of elite Pacific rugby players. Since the introduction of professionalism into rugby in 1995, increasingly Pacific Island players have viewed rugby as a site where they can achieve success and monetary reward within a mainstream New Zealand context. Indeed, Pacific Island players now dominate Auckland (and to a lesser extent Wellington) rugby, especially, and are more and more gaining All Black honours, to such an extent that for the All Black 'number one' 15 who play the South Africans in the World Cup quarter final this weekend, one-third (that is, five) of those players are of Pacific Island descent (excluding Mäori players). This year the Auckland Blues franchise won the Super 12 and for two years running the Auckland NPC side has won the national championship. Moreover, the New Zealand Warriors, who play in the Australian National Rugby League competition, is dominated by Pacific Island players. In all, this means that three of New Zealand's currently most successful and popular sports-franchises, are heavily manned by Pacific Island players. This phenomena has, in a recent Television 3 documentary, come to be known as the 'browning of New Zealand rugby.'The present research, thus, stemmed from one main purpose; essentially, to find out why Pacific Island players were playing rugby or, in more scientific parlance, what was/is the participation motivation of elite Pacific Island rugby players. While there is considerable research in sport psychology on motivation, and some on motivation of elite athletes, there appears to be no research on participation motivation of elite Pacific sports people. Sport participation research has been dominated by western theories and models and have predominantly focused on North American athletes. There is no research that has incorporated a theory or model that encompasses those values that are significant to Pacific Peoples. The lack of research in this area suggests that there is little scientific knowledge, at least, about this phenomena, and that research is needed to identify what specific cultural factors exist that motivate so many Pacific Islanders to play sport. The research is, therefore, based on the assumption that different cultures have variant versions of success and failure, different values, motivations, histories, and attitudes, as opposed to a mono-cultural outlook and, thus, these factors are important to investigate in separation from other cultures. This research is important, therefore, because understanding the culture of Pacific sports people is just one of the new challenges facing coaches, sport managers, sport administrators sport psychologists, physical educators, team and personal trainers, and others who work in the sport industry, in a rapidly changing face of New Zealand sport. Indeed, because of the high-level of Pacific Island involvement in sport it is important for all sports groups in New Zealand to understand how to deal with Pacific Island players in terms of what motivates them to achieve or succeed. What is also of importance is the historical and sociological implications of the so called 'browning of New Zealand rugby' and so this will be a secondary issue raised within this analysis.Dissertation summary Consequently, in Chapter 1 the present research initially examines western research on sport participation motivation, finding that while there are useful distinctions such as internal and external motivation, the research is largely mono-cultural in that it fails to acknowledge the role ethnicity and culture plays in determining participation motivation. The second section of Chapter 1, thus, looks at those factors such as family, religion and education, which are central to Pacific Island culture. Chapter 2 provides an historical and sociological contextualisation of Pacific Island sport participation in New Zealand, and briefly examines stereotypes that surround Pacific athletes in relation to similar prejudice shown towards African American athletes in the United States. In Chapter 3, I describe the method employed within this research, that is, semi-structured interviews and narrative. In this analysis I outline the Pacific Island research ethics inherent to the research process. Chapter 4 provides the results of the present research. Here I briefly tell the stories provided by the three participants involved in this study. Because all the participants focused on similar themes, I am able to provide a thematic analysis of each participant under six subject-headings; personal contextualisation; family; education; religion; perceptions of professional rugby; and participation motivation. In the Discussion Chapter (Chapter 5), I conclude this Dissertation by discussing the relevance of the results to the aims of the research, pinpointing family, religion and education as the three most significant cultural factors that affect Pacific Island sport participation motivation. I also provide suggestions to coaches and significant others in the New Zealand sport industry based on these three cultural factors.

The value of sport: main report

Walking for recreation: an innovative method for creating a GIS-based walkability surface on the Gold Coast, Australia

Towards heat resilience in the built environment: case studies in Sydney, Melbourne and Adelaide 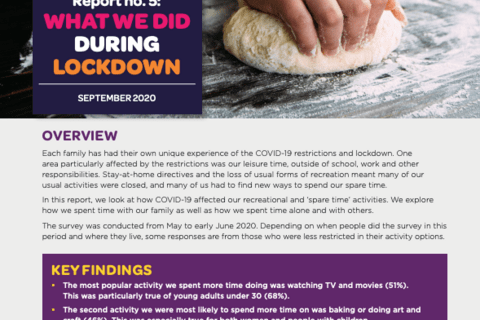 Families in Australia Survey: life during COVID-19 - report no.5

Leisure on the Fringe

Poia atu taku poi: Unearthing the knowledge of the past