Policing young people in NSW: a study of the Suspect Targeting Management Plan

The New South Wales Police Force Suspect Targeting Management Plan (STMP) seeks to prevent future offending by targeting repeat offenders and people police believe are likely to commit future crime. The STMP is both a police intelligence tool that uses risk assessment to ‘predict’ suspects and a targeted program. Once a person is on the STMP they are repeatedly targeted by police, including being stopped and searched and visited at home regardless of whether they have committed a violence offence or minor offences like shoplifting or graffiti or even if they are just known to police but have never been convicted of an offence. The rationale underlying the STMP is that subjecting people to high levels of police contact will disrupt them from committing future crimes. But the STMP raises serious questions for civil liberties, police accountability and the appropriateness of a police program predicated upon harassment and at times, unlawful conduct.

NSW Police have special obligations of care and protection to young people, including to divert young people from the criminal justice system. Our report explains why NSW Police should not be exposing young people to the STMP.

In summary, the research found:

- Disproportionate use of the STMP against young people and Aboriginal peoples;

- Patterns of oppressive policing that may be damaging relationships between police and young people;

- The STMP increases young people’s costly contact with the criminal justice system and has no observable impact on crime prevention;

- No transparency and an absence of oversight, scrutiny or evaluation. 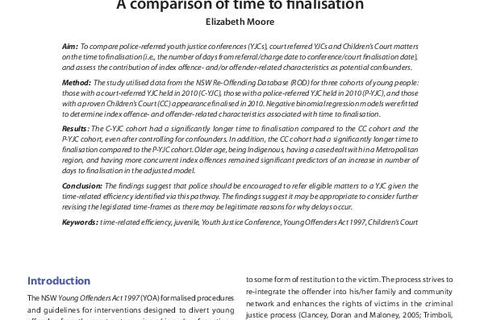 Youth Justice Conferences versus Children’s Court: a comparison of time to finalisation

Offending by children in New Zealand

Why is the juvenile re-offending rate higher than expected?