This review, completed in 1991, set out to suggest a vision for the future development of Adelaide.

Adelaide's development has been the cause of protracted and often heated debate in recent years. Major projects, urban growth, housing costs and homelessness, traffic congestion, pollution, and vandalism have all provoked strong reactions from the comi!lunity. Increasingly, the issues raised have extended beyond the traditional concerns of urban planning. Much of this debate has focused on individual development proposals, often because of the absence of an overall vision for Adelaide's future development. The Planning Review was set up to provide this vision and the kind of planning system needed to achieve it.

There will always be differing views and interests involved in the development of the city, but proposals need to be judged in the context of an overall direction and within rules understood and accepted by everyone. The system can be made better, clearer and more consistent. The Review's vision for Adelaide does not assume that futuristic technology will ilramatically alter the form of the city. The last comprehensive plan for Adelaide was prepared in 1962. Since then there has been more urban growth, some tall office buildings have changed the skyline of the central area and a number of older buildings have been demolished, but the city has retained its overall form and appearance.

To the traveller arriving by air in 2020, things may not look very different. Most of the buildings developed over the past 150 years will still be there. The Review's picture of Adelaide's future accepts an.d builds on the past and present. It seeks a city in which new technology and heightened environmental awareness will enhance Adelaide's existing qualities of human scale, respect for heritage, local diversity, openness and accessibility. So far, the Review has assembled an integrated picture of Adelaide's present position and future prospects, which reflects the complex interrelationships between topics such as urban development, population ageing, transport needs and carbon dioxide emissions. In doing so, it has attempted to reflect and inform public opinion and preferences.

Given the Premier's requirement for the Review to be open and consultative, the first task was to bring together relevant issues, ideas and concerns. Through the Planning Review Reference Group, the first report "Issues for Adelaide" was prepared in July 1990. That report was then widely discussed by the public. A large number of submissions was made and the Review took them into account. Research on the issues was undertaken ·and Working papers prepared. Many government agencies provided assistance and expertise.

Broadly, this Report suggests a vision for the future development of Adelaide, describes the findings of the Review, postulates goals, sets out strategies to achieve the goals, and outlines the key methods and procedures of implementation. The next stage for the Review will involve extensive community discussion on these ideas. The proposals will then be amended in light of the public response. Thereafter, the Review will implement th0se of its recommendations that are accepted by Government. At all times, there will be the widest possible opportunities for public input. 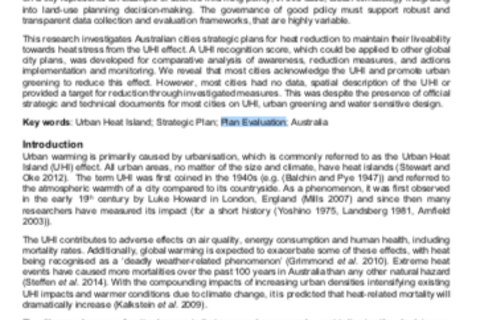 Temporary use 2.0: a tool for planning and developing the new urban context