The pitfalls of economic development in the United States

In the rush to establish development priorities, goals and programs many rural organisations have assumed that the strategies of the past could be successfully implemented in the 1990s. For example, attracting branch plants, marketing cheap labour or promoting tourism.

However, in the 1990s a new economic order requires qualitatively and quantify different goals, and strategies. In the rush to emulate past successes many rural development organisations have fallen into the "pitfalls' of economic development. Many rural development organisations in the states have, too often, established and implemented programs without stepping back and allocating enough time to envision a different economic future than the past. Again, too often, strategies revolve around a particular state or federal program, intuition or a particular political interest group. Consequently, opportunities are missed to set a new course and direction.

Peer review of the Republic of Nauru

Australia's regions and their potential for economic and population growth

Planning for a vibrant future 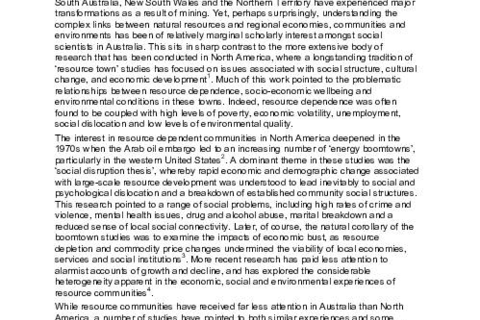 Natural resource exploitation and regional development: a view from the west