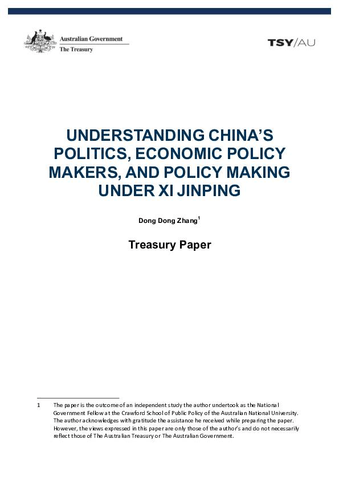 Economic policy is product of a policy making process, in which policy players seek to influence the economic developments to achieve social, economic and political objectives. Policy making is a key variable in determining policy outcomes and economic performance. Ultimately, policy making is shaped by politics, which sets out policy goals, and defines the rules and institutions within which policy is made. Policy players operating within this political environment determine how policies are formulated and implemented.

Like other advanced economies, Australian officials have had a great amount of direct contact with Chinese officials in the bilateral, regional and global official dealings and forums that occur around the year. Many Chinese officials with whom Australian officials have met hold key positions in China’s political and policy system. Their names, positions, responsibilities and activities have become more readily available in Chinese media and official websites.

Yet for Australian officials advising on China’s economic policy, there remains a considerable lacunae of understanding about how Chinese leaders and policy makers operate within China’s political and policy making system. The non-transparency in China’s political system means the conduct of policy making in China has remained significantly behind-the-scenes. There are aspects of every country’s policy making processes that remain secret but the level of secrecy in the Chinese policy process is of another dimension. The whole picture of how Chinese policy is developed may never be fully revealed.

Lack of understanding, however, is also related to unfamiliarity with China’s political and policy settings, which are very different from those in Australia. For Australian policy advisers, the comprehension of China’s economic policy making is likely to be far less intuitive than that of the United States, the political system and culture of which are familiar to Australia.