This report estimates the net incomes of UberX drivers in six Australian cities, on the basis of public information regarding Uber’s pricing structure, a representative benchmark urban trip, and other parameters (including vehicle expense guidelines in Australia’s tax system). The main findings of these simulations include:

- UberX services are provided at significantly lower prices than traditional taxi services in all major Australian cities; on average, traditional taxis are about 40 percent more expensive than UberX, based on a representative benchmark trip.

- Under normal pricing schedules, it is very unlikely that UberX drivers earn net income (after all expenses) equivalent to Australia’s statutory minimum wages for workers in this industry.

- We estimate the net income of Uber drivers (on average across the six cities considered in the report) under plausible assumptions to be $14.62 per hour. The highest simulated net incomes are generated in Canberra and Sydney (over $18 per hour); the lowest are in Perth (under $11 per hour).

- The simulated average hourly net income for Uber drivers is well below Australia’s basic statutory minimum wage, of $18.29 per hour. And it equals less than half the statutory minimum payments required under the relevant Modern Award that would apply to waged workers in this sector (taking into account casual loading increments and penalty rates for evening and weekend work).

The implicit wage subsidy paid to Uber by its drivers, in the form of below-minimumwage labour, is large relative to the overall fares and margins generated in this business. It is equivalent to a subsidy paid to Uber (and ultimately its owners) by its Australian drivers, that is worth hundreds of millions of dollars per year. And if UberX prices were increased enough to pay minimum statutory wages to its drivers, almost all of UberX’s price advantage relative to traditional taxis would disappear.

The report concludes that Australian lawmakers and regulators should urgently investigate the low net incomes received by UberX drivers (and other workers in the so-called “gig economy”), consider their relationship to normal minimum labour standards, and then develop effective regulatory responses to ensure these workers are afforded the same protections as other workers in Australia. In particular, regulators need to modernise and strengthen the definition of who constitutes an “employee” in Australian workplaces, to take account of the growth of irregular labour practices associated with digital business models.

The rise of alternative work arrangements: evidence and implications for tax filing and benefit coverage 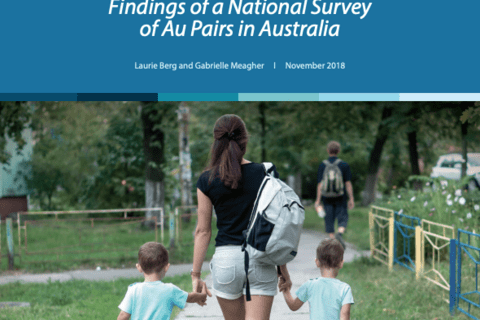 Cultural exchange or cheap housekeeper? Findings of a national survey of au pairs in Australia