The Community Development Program (CDP) is remote Australia’s Work for the Dole (WFD) and 'job assistance' scheme. In place since 2015, it operates across almost 75 percent of Australia’s area, an area with a population of just 304,000 people. Indigenous people are over 80% of the CDP’s 34,000 participants. In other words, CDP participants are 11 percent of the population in these regions.

This highlights a key point about remote Australia – there just are not jobs to be had. CDP regions have unemployment rates of up to 51%, when averaged across states and can be higher still at a local level. The situation is not helped by low educational attainment and low household incomes. A median family income in the NT’s CDP regions is just $1,137 per week, compared to the Australian average of $1,734.

The CDP has been criticised by civil society groups, Indigenous groups, academics and even police with allegations that it pays below minimum wage and its penalty system is punitive, entrenching poverty, causing housing stress and even hunger. The Arnhem Land Progress Aboriginal Association has reported that fresh food sales at its stores declined by almost 10% per year under the two years of the CDP’s operation.

CDP participants are typically required to work 25 hours a week for $280 a week, or $11.20 per hour. The current minimum wage is $18.29 per hour. That is before any penalties that might be incurred.

Appropriateness and effectiveness of the objectives, design, implementation and evaluation of the Community Development Program (CDP) 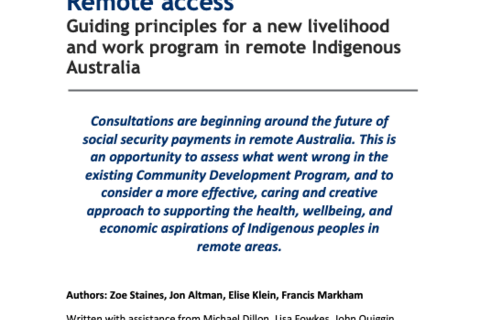 The application of income support obligations and penalties to remote Indigenous Australians, 2013–18

More concerns raised over remote work for the dole scheme