Breastfeeding and infants' time use

Being breastfed during infancy is known to improve developmental outcomes, but the pathways by which this occurs remain unclear. One possible yet unexplored mechanism is that breastfed infants may spend their time differently to infants who are not breastfed.

This paper analyses infants' time use according to breastfeeding status in order to help inform the debate about how breastfeeding leads to improved child outcomes.

The analysis uses infants' time use data from the first wave (2004) of Growing Up in Australia: The Longitudinal Study of Australian Children (LSAC), derived from diaries completed by the parents of almost 3,000 Australian infants aged 3-14 months. It explores how much time infants spend in activities such as being held or cuddled, read or talked to, or crying, using data on whether or not infants were still breastfeeding, and taking into account other child and family characteristics. It also compares time spent in different social contexts. Finally, the paper uses the time use data to analyse which infants were still breastfeeding, and what factors are associated with differences in time spent breastfeeding.

The results show that breastfed infants spend more time being held or cuddled and being read or talked to, and less time sleeping, or eating, drinking or being fed other foods. They also cried slightly more, and watched television slightly less than infants who were not being breastfed. Those who breastfed spent more time with their parents, and in particular, almost one additional hour a day alone with their mother compared to non-breastfeeding infants.

These findings have important implications for how children grow, and show the value of time use data in exploring pathways to development for infants and young children. The possibility that cognitive advantages for breastfed children may arise from their distinct patterns of time use and social contexts during the breastfeeding phase is an important area for future research using survey data such as from LSAC.

Australian national breastfeeding strategy: 2019 and beyond 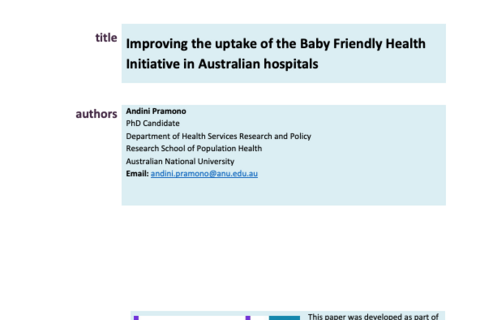 State of the world's mothers report 2007

Carers of Indigenous children: services and systems failure? Where to next?

“Everyone my age doesn’t know what it’s like”: a mixed-method study of young mothers and social support in Australia

Australia's mothers and babies 2016—in brief