Palermo on the Pacific Rim: Organised crime offences in the Asia Pacific Region

Offences designed to penalise criminal organisations constitute the most recent and perhaps most ambitious strategy to fight organised crime.  The common feature of these offences is that they are designed to target the structure, organisation, members, and associates of organised crime groups.  Their shared rationale is the
view that disrupting criminal activities and arresting individual offenders does not dismantle the criminal organisations that stand behind these illegal activities.

Four main types of organised crime offences are identified in this study.  These include:

1. The conspiracy model, found in the Convention against Transnational Crime and in jurisdictions such as Australia, Singapore, Malaysia, Brunei Darussalam, and several Pacific Island nations;

3. The enterprise model based on the US RICO Act, which is also used in many US States, and the Philippines;

His principal areas of research include criminal law, organised crime, narco-trafficking, terrorism, international criminal law, and immigration and refugee law.  His recent works focuses on trafficking in persons, organised crime legislation, the illicit trade in timber and timber products, and the illicit market for amphetamine-type stimulants.  His work has been cited by other scholars, in government publications, and judicial decisions, including the High Court of Australia.  He is a frequent commentator on organised crime and criminal law on national television, radio, and in newspapers.

Election FactCheck: is crime getting worse in Australia?

What are the taxpayer savings from cancelling the visas of organised crime offenders?

The globalization of crime - A transnational organized crime threat assessment

Exploring the relationship between organised crime and volume crime 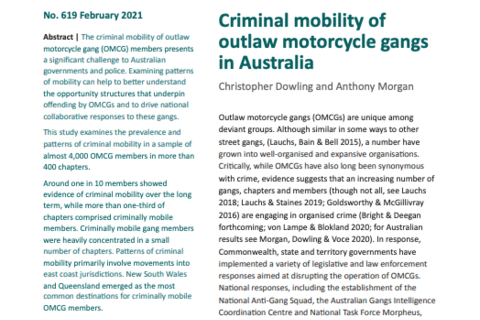