Who can afford to be sick?

MANY AUSTRALIANS in the workforce have access to paid sick leave. In fact, unless you are a casual employee, or not in the labour force, access to sick leave is probably part of your working conditions. And many of us, if asked, would say we are healthy – in 2007, 84 per cent of men and women of working age, when asked this question, responded that they had good to excellent health.

Recent research by Binod Nepal, Alicia Payne and Laurie Brown at the National Centre for Social and Economic Modelling at the University of Canberra, published in the AMP.NATSEM report Healthy, Wealthy and Wise?, suggests that people aged 25–64 who are in poor health are more likely not to be working, and therefore had lower incomes than people with good health. This effect was seen for every age group, and for both men and women.

Now, remembering that women earn significantly less than men at this age, due to family commitments, working part time, and taking career breaks (again, see She Works Hard for Her Money), we can see that a family with a male in poor health is really going to be struggling. Further, in the case we have been looking at, the male is still in the labour force. In fact, 43 per cent of men with poor health rely on government benefits, so their income may well be less than if they were working.

Obviously the scenario we paint above is a bleak picture, and in fact a family may adjust to a family member in poor health by others taking more of the income-earning load. But the fact is that there are families in our community struggling due to ill health, and the problems associated with earning an income when poor health means a reduced capacity to work full time.

The message from this report is that ill-health can have a huge effect on the income of a family, mainly through the capacity of an individual in the family to work. These implications can be long term, depending on when the person becomes ill. If they suffer long term illness when aged 35–54, lifetime earnings will be lower, and superannuation will be lower. Further, if it is the primary income earner in a family who becomes sick, then the carer is already earning less working part time or is out of the labour force, so the family is hit with a double blow.

The other message from this report is that maintaining good health is, and should be, an important goal of individuals and government’s. It provides a foundation for strong employment and earnings growth, and hence a strong economy.

Surgical intervention: how to improve access to surgical care in the developing world 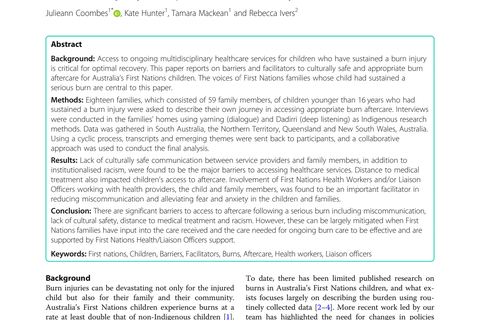 The journey of aftercare for Australia’s First Nations families whose child had sustained a burn injury: a qualitative study