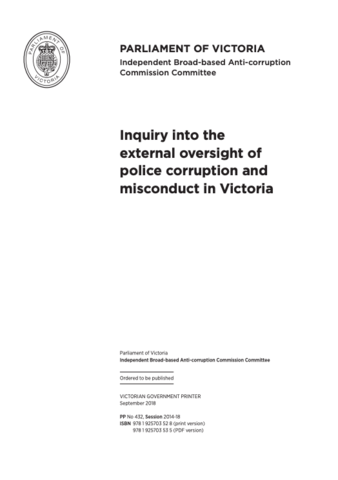 Under s 33 of the Parliamentary Committees Act 2003, the Independent Broad‑based Anti‑corruption Commission Committee inquire into, consider and report, no later than 30 June 2018, on the external oversight and investigation of police corruption and misconduct in Victoria.

Specifically, the Committee is required to:

In 2016, the Independent Broad‑based Anti‑Corruption Commission Committee’s Strengthening Victoria’s integrity agencies? report identified concerns among stakeholders about the transparency, impartiality and effectiveness of the current police complaint‑handling and oversight systems in Victoria. Some stakeholders called for the establishment of a new, independent body to receive, handle and investigate all complaints about police, instead of Victoria Police and the Independent Broad-based Anti-corruption Commission (IBAC), along the lines of the Office of the Police Ombudsman for Northern Ireland (PONI). In response to these concerns, the Committee determined in July 2016 to inquire into the external oversight of police corruption and misconduct in Victoria, including the effectiveness of the complaints and police oversight systems.

Police play a vital role in society in preventing crime, enforcing the law and protecting and assisting the community on a day‑to‑day basis. Their work is complex and demanding and can be extremely challenging. In order to meet these demands and effectively carry out their duties, police are provided with significant powers, strictly governed by the law, to detain, search and use force against individuals. The community expects these powers to be used lawfully and that police officers will be accountable for their actions.

The community’s trust and confidence in the police is reinforced by the effective, ‘independent and objective’ oversight of its complaints handling, which contributes to the accountability of police in a democratic society. However, there has been considerable, and continuing, debate about how that independent oversight of police ought to be institutionalised and exercised. A key issue in this debate is how to strike an appropriate balance between police responsibility for managing the conduct of their members and an external agency’s oversight and investigation of complaints about police. In examining this issue, the Committee has explored the relevant research, evaluated the evidence it has received and sought to learn from interstate and international experience as well as best practice principles.