The economic impacts of unconventional gas in Western Australia

Western Australia’s fracking moratorium has been overturned with little consideration of the likely economic and social impacts of developing an unconventional gas industry. Despite industry claims that it is looking to develop “small regional gas projects”, proponents are boasting to investors of “world-scale” resources.

The USA has similar quantities of unconventional gas to WA. Since the development of US resources began in 2007, the production rate has grown to a scale about ten times more than Western Australia’s output of LNG from offshore wells in 2017. Queensland coal seam gas (CSG) production has grown to four times the size of domestic gas use in Western Australia, and the rate of extraction is still rising. While the commercial viability of WA shale projects is uncertain, incentives point in the direction of largescale development.

For established rural and agricultural communities, the social changes that come from rapid unconventional gas development are not always positive. A survey funded by gas companies in 2014 found that communities in Queensland’s Darling Downs had predominantly negative views about the effect of the CSG boom on their region.Only around 6% of respondents thought that the community was “Changing to something different, but better”, while the majority of respondents said they were “Resisting”, “Not coping”, or “Only just coping”.

Oil and gas industries are capital intensive and employ relatively few people. Taking a broad definition of the gas industry, WA’s 11,400 gas industry workers represent just 1 percent of employment in the state. Oil and gas extraction employs less people per dollar of value added than any other industry, including other parts of the resource sector. If employment growth is the policy goal, then investment in virtually any other industry is will deliver better results.

The Northern Territory Government’s fracking inquiry commissioned economic research from regular gas industry consultants, ACIL Allen. ACIL estimated that gas extraction roughly equivalent to WA’s current domestic supply would increase employment by just 524 jobs. They considered this a ‘low to very low’ probability outcome, with changes to employment between 80 and 200 more likely. Even if all jobs went to local people in WA’s northern outback region, only a minor impact would be had on the regions 2,796 people unemployed.

Many of the region’s unemployed are Indigenous. Indigenous people account for 3.7% of resource jobs industry wide. Based on this share of employment unconventional gas in WA could be expected to create between three and 19 long-term jobs for Indigenous people.

Experience in Queensland suggests unconventional gas creates very few jobs in other industries. While construction and professional services do benefit, there was a loss of 1.8 agricultural jobs for every new gas job created.

Despite being a large producer and exporter of gas, petroleum royalties are a small part of WA State Government revenue. Petroleum royalties and related North West Shelf Grants make up just 2 percent of the $29.5 billion state budget. In Queensland, the reality of unconventional gas royalties has been radically different from the picture given by the gas industry when they sought approvals for their projects. ACIL estimates in the NT show that even a best-case large shale gas industry would be likely to generate revenue worth just 0.6 percent of WA state government revenue. This is roughly equal to the value of traffic fines in the WA budget.

Relative to conventional gas, shale gas is high cost to extract. On the East Coast, high cost coal seam gas entered the production mix in 2015 and drove up the average cost of gas by 72%. AEMO expects supply from domestic-only gas facilities to decline and total contracted domestic supply to fall from 2020 to 2023. At this point AEMO expects WA domestic gas prices to rise and encourage further supply. If this supply comes from high-cost unconventional sources, prices will remain high. Especially if domestic gas suppliers are able to exert market power. Santos has just completed the acquisition of a significant supplier to the WA market, Quadrant Energy. Santos has used its position in the east coast market to intentionally increase domestic prices there.

Options for the implementation of recommendation 9.8 of NT Fracking Inquiry 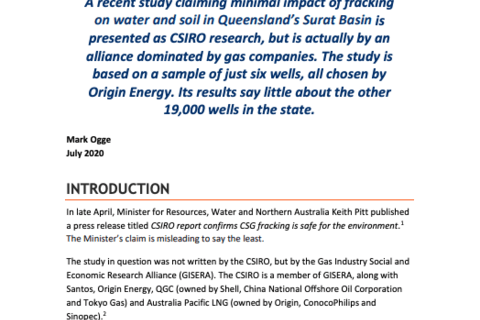