The Australian personally controlled electronic health record, My Health Record (MyHR), is a repository of summary health information about patients which is stored online, and which patients can choose to share with their health providers. In this paper, an investigation of the representation of Australia’s My Health Record on Twitter via a data set of 6191 tweets associated with MyHR is reported. The data sets include tweets that include three specific hashtags related to this electronic health record. These hashtags reflect the official names for MyHR that have been used since 2012 (i.e., #PCEHR, #MyHealthRecord and #MyHR).

Time sequence analysis, text analytics and network visualisation were employed to explore the Twitter activity and content, and to identify influential users and their relationships. The text content of tweets using the above hashtags spanned positive/supportive, neutral/factual and negative/opposing themes regarding electronic health records. Text visualisation highlighted six accounts that were active and also mentioned frequently in tweets. In particular, three of these accounts were always ranked in the top ten on several measures of activity and interactivity, so could be considered highly influential. Network visualisation of the connections between accounts, represented by tweets from senders to those mentioned, revealed associations between some prominent accounts and their publicly-stated stance on electronic health records. The further collection of tweets to and from the six influential Twitter accounts in this study, specifically in the context of the opt-out system being introduced nationally, might be useful in examining how individuals engage with their audience to create and disseminate information about electronic health records.

A content analysis of the consumer-facing online information about My Health Record: implications for increasing knowledge and awareness to facilitate uptake and use

Your health data was once between you and your doctor. But for how long?

The e-health literacy demands of Australia’s My Health Record: a heuristic evaluation of usability 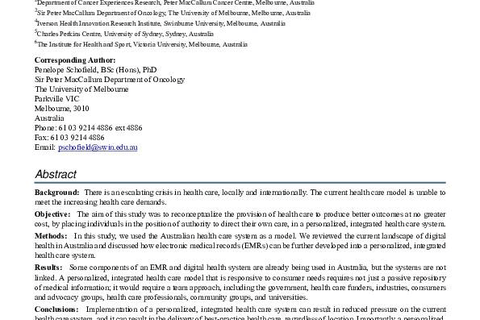 Patienthood and participation in the digital era

Self-quantification: the informatics of personal data management for health and fitness

Paper tsunami: how the move to digital medical records is leaving us drowning in old paper files

My Health record: the government wants to access your data until 30 years after you die