In 2008, the Council of Australian Governments (COAG) endorsed a broad reform agenda with the goals of boosting productivity, increasing workforce participation and geographic mobility, and delivering better services for the community. Wider objectives included social inclusion, closing the gap on Indigenous disadvantage and environmental sustainability (COAG 2008b, 2008a). One element of this agenda targeted overlapping and inconsistent national, State and Territory regulations — with the aim of fostering a seamless national economy. In this context, transport was identified as one sector for action.

Consequently, in 2009 COAG agreed to create national regulatory regimes for maritime safety, rail safety and heavy vehicle safety and productivity. COAG’s intention was to improve safety while reducing costs and regulatory burden for transport companies and, as a result, lowering costs of exports and trade (COAG 2009). State-specific laws, regulations and regulators were to be replaced with national laws and regulators in each transport mode. Intergovernmental agreements to this effect were signed in 2011 (COAG 2011c, 2011a, 2011b). Estimates of the likely benefits of this reform agenda were substantial for the changes to heavy vehicle regulation.

The terms of reference for the inquiry (attachment A) require the Commission to:

Broader COAG reform goals are to be taken into account, and the Commission is to have regard to complementary reforms, including (but not limited to): rail standards harmonisation and interoperability; improved network access for higher productivity vehicles; and the development of the National Freight and Supply Chain Strategy. 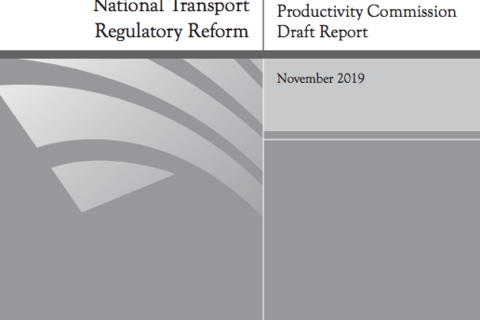 $500m for station car parks? Other transport solutions could do much more for the money