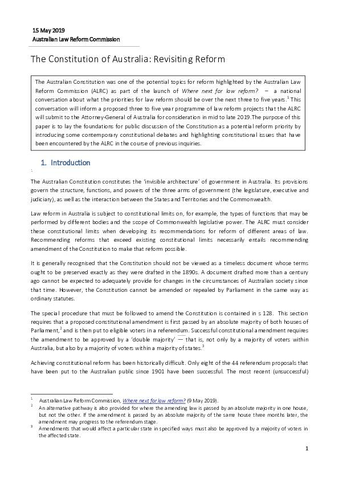 The Constitution of Australia: revisiting reform

The Australian Constitution was one of the potential topics for reform highlighted by the Australian Law Reform Commission (ALRC) as part of the launch of Where next for law reform? – a national conversation about what the priorities for law reform should be over the next three to five years.

This conversation will inform a proposed three to five year programme of law reform projects that the ALRC will submit to the Attorney-General of Australia for consideration in mid to late 2019. The purpose of this paper is to lay the foundations for public discussion of the Constitution as a potential reform priority by introducing some contemporary constitutional debates and highlighting constitutional issues that have been encountered by the ALRC in the course of previous inquiries.

Are we overthinking referendums?

Duel citizens and the postal survey: what might the High Court say?

The dual citizenship saga shows our Constitution must be changed, and now

The future of the First Amendment: 2018 survey of high school students and teachers

Grattan on Friday: Fixing citizenship imbroglio is not just a matter of better paperwork

Yes, section 44 can be fixed