The last decade has seen increased policy reform in Australia to reduce domestic and family violence (DFV) and provide appropriate services for victims, who are predominantly women and their children. This paper provides the first quantitative assessment based on representative Australian population data of the legal and related problems that often coincide with DFV. Regression and bivariate analyses of the Legal Australia-Wide (LAW) Survey underlined the serious nature of DFV victimisation and revealed the gamut of severe legal problems and adverse life impacts that often result from, or accompany, DFV.

Survey respondents who had experienced DFV in the previous 12 months (‘DFV respondents’) were 10 times more likely than others to experience other legal problems, including a wide range of family, civil and criminal law issues. Their odds of experiencing family law problems were especially elevated – a massive 16 times higher than for other respondents. They were also at least three times more likely to experience 10 of the other 11 legal problem types examined, including criminal law problems and civil law problems related to employment, financial, government payment, health, housing, personal injury and rights issues.

Not only was DFV linked to a myriad of legal problems, but these legal problems were also more severe with greater adverse impacts on broad life circumstances. Four in five DFV respondents rated at least one of their legal problems as having a ‘severe’ impact on their everyday life, compared to fewer than one-quarter of others. Their legal problems were more likely to lead to stress-related illness, physical ill health, relationship breakdown, loss of income or financial strain, and moving home. They were more likely to require assistance from professionals, particularly lawyers and health and welfare professionals, and to require recourse to formal legal processes to achieve resolution.

These findings demonstrating the ‘compounding effect’ of DFV victimisation on legal and human service needs, together with the relatively disadvantaged profile of people experiencing DFV, reinforce the importance of accessible public legal assistance services for DFV remaining a government policy priority. Holistic, joined-up legal and broader human services are often necessary to address the complex legal and related needs of people experiencing DFV.

The results highlight the importance of ongoing funding to support initiatives that provide wrap-around assistance for DFV such as Domestic Violence Units (DVUs) and the Family Advocacy Support Services (FASS) scheme in the Local and Family Courts, as well as initiatives that link victims to legal and human services outside the court system. In addition, they indicate the potential utility of further expanding joined-up DFV services to better address the wide range of criminal and civil law problems, as well as family law problems, that are often tied up with DFV, which often span across Commonwealth and state/territory jurisdictions. 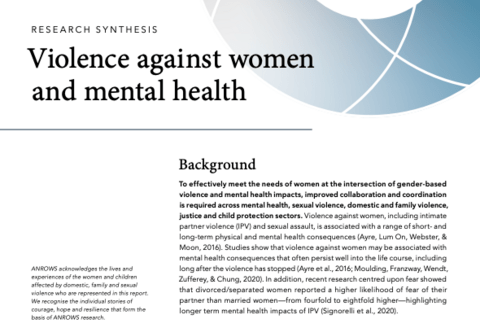 Violence against women and mental health

Family and sexual violence and its impact on families in Lae

Family violence may not discriminate, but the impacts are unequally felt: why an intersectional approach matters

Evaluation of the Integrated Domestic and Family Violence Services program