In June 2017, The Task Force on Climate-related Financial Disclosures (Task Force or TCFD) released its final recommendations (2017 report), which provide a framework for companies and other organizations to develop more effective climate-related financial disclosures through their existing reporting processes. In its 2017 report, the Task Force emphasized the importance of transparency in pricing risk—including risk related to climate change—to support informed, efficient capital-allocation decisions. The large-scale and complex nature of climate change makes it uniquely challenging, especially in the context of economic decision making. Furthermore, many companies incorrectly view the implications of climate change to be relevant only in the long term and, therefore, not necessarily relevant to decisions made today. Those views, however, have begun to change.

Based on a recent report issued by the Intergovernmental Panel on Climate Change, a global group of climate scientists convened by the United Nations, urgent and unprecedented changes are needed to meet the goals of the Paris Agreement. The report warns limiting the global average temperature to a maximum of 1.5°C “require[s] rapid and far-reaching transitions in energy, land, urban and infrastructure [systems] (including transport and buildings), and industrial systems.” In fact, according to a recent United Nations Environment Programme report on emissions, global greenhouse gas emissions have to peak by 2020 and decline rapidly thereafter to limit the increase in the global average temperature to no more than 1.5°C above pre-industrial levels. However, based on current policies and commitments, “global emissions are not even estimated to peak by 2030—let alone by 2020.” As a result, governments and private-sector entities are considering a range of options for reducing global emissions, which could result in disruptive changes across economic sectors and regions in the near term. 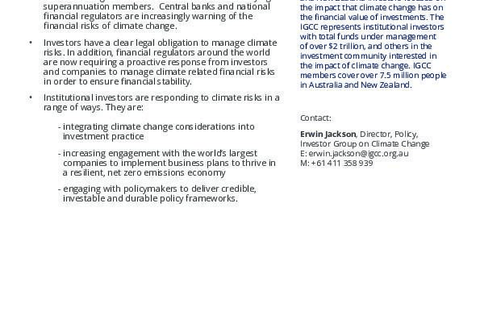 A history of Australian equities