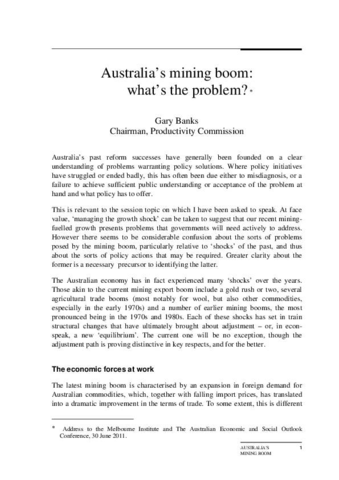 In this address to the session 'Managing the Growth Shock' at the Economic and Social Outlook Conference in Melbourne on 30 June 2011, Gary Banks discusses the role for policy in the current mining boom.

"Australia’s past reform successes have generally been founded on a clear understanding of problems warranting policy solutions. Where policy initiatives have struggled or ended badly, this has often been due either to misdiagnosis, or a failure to achieve sufficient public understanding or acceptance of the problem at hand and what policy has to offer."

"This is relevant to the session topic on which I have been asked to speak. At face value, ‘managing the growth shock’ can be taken to suggest that our recent mining- fuelled growth presents problems that governments will need actively to address. However there seems to be considerable confusion about the sorts of problems posed by the mining boom, particularly relative to ‘shocks’ of the past, and thus about the sorts of policy actions that may be required. Greater clarity about the former is a necessary precursor to identifying the latter."

"The Australian economy has in fact experienced many ‘shocks’ over the years. Those akin to the current mining export boom include a gold rush or two, several agricultural trade booms (most notably for wool, but also other commodities, especially in the early 1970s) and a number of earlier mining booms, the most pronounced being in the 1970s and 1980s. Each of these shocks has set in train structural changes that have ultimately brought about adjustment – or, in econ- speak, a new ‘equilibrium’. The current one will be no exception, though the adjustment path is proving distinctive in key respects, and for the better."

The economic forces at work

The Australian resources sector: its contribution to the nation, and a brief review of issues and impacts