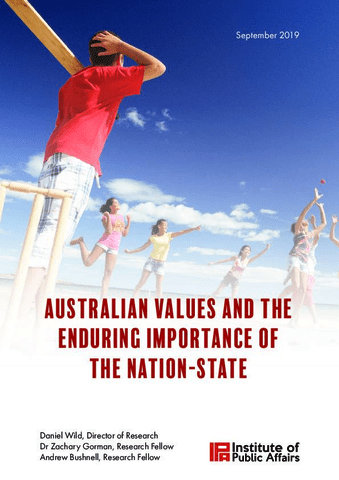 The preparation of Australian values and the enduring importance of the nation-state is motivated by the Senate Legal and Constitutional Affairs References Committee’s Inquiry into nationhood, national identity and democracy. This inquiry’s remit is broad and ranges from changing notions of nationhood, declining public trust in Australia’s major political institutions, and the impact of globalisation and economic interdependence on the nation state. This report focuses on five areas.

First, this report outlines three key Australian values: political and economic freedom, egalitarianism, and localism and argues that these values are deeply ingrained in Australia’s national identity. These values ought to be buttressed by broad protections for freedom of speech, association, and religion; low taxes and a tolerable regulatory regime so as not to discourage enterprise; and a return to the principles of localism and federalism upon which Australia was founded.

Secondly, it is argued that the society that will be best-placed to respond to the challenges identified in the Senate Committee’s discussion paper is an asset-owning democracy, within which individuals have reason and incentive to pursue their interests to their own benefit and to that of their community and nation. There are five key components of asset-owning democracy which give Australians a stake in the success of the nation:

Thirdly, this paper considers the ongoing relevance and importance of the nation-state as a home where millions of individuals can live together with a shared set of values, customs, habits, and beliefs, and enjoy with one another a common heritage and tradition.

Fourthly, we consider the idea of popular sovereignty and argue that declining trust in Australia’s governing institutions caused in part by the departure of our rulers from Australia’s fundamental values. In particular, this section outlines the way in which freedom, egalitarianism, and localism have been undermined through government intervention.

The final section considers the notion of democratic accountability—of giving power back to the people—and the ways in which this can be implemented so as to restore trust among the public in Australia’s governing institutions.

John Howard: a conversation on culture

How has same-sex marriage impacted on religious freedom in Ireland?

Freedom of religion and belief in a multicultural democracy: an inherent contradiction or an achievable human right?