Two prominent Indigenous Australians, Tom Calma and Marcia Langton, have been appointed to chair a senior advisory group to oversee an extensive process for developing options for an Indigenous “voice to government”. The process will also develop ways to get more Indigenous input to state and local decisions, especially on the issue of service delivery.
Announcing details, Minister for Indigenous Australians Ken Wyatt said Indigenous people throughout the country would be able to have their say.

The con-stitutional re-cognition (s)cam-pain: the campaign for the hidden recognition of first nations peoples' racial inferiority

What is Constitutional Recognition of Aboriginal and Torres Strait Islander peoples?

Three years on from Uluru, we must lift the blindfolds of liberalism to make progress 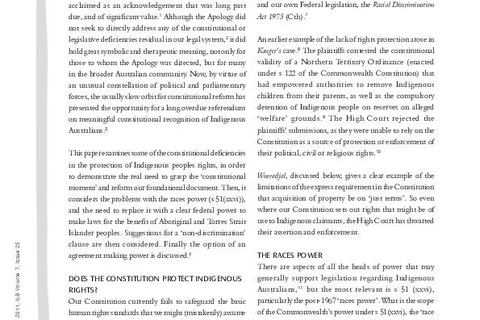 Constitutional deficiencies in the protection of Indigenous rights