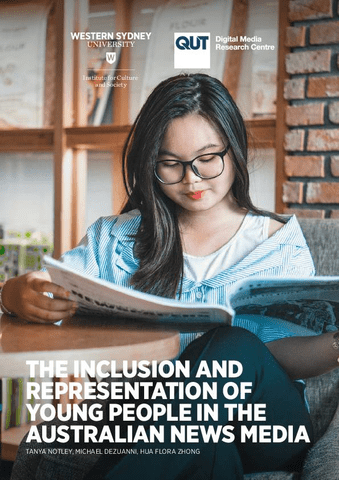 The Australian news media provide an important lens through which we see ourselves and our nation: they both reflect and influence public discourse and priorities. This snapshot study of news media critiques the inclusion and representation of young Australians (aged 4-18 years) in the news.

To achieve this, we have analysed a sample of national, state and regional Australian news media from April 1st, 2019, a day we consider to be an ‘unremarkable’ day in the news cycle. In total, we analysed 276 news stories across 8 newspapers and 4 television news bulletins.

The findings from this study suggest that young people are seldom given the opportunity to speak for themselves in the news. At the same time, young people as a social category were given almost no attention. In our study, when young people did appear in the news, the most common focus for these stories related to accidents and social welfare. Young Australians were not represented in stories about the economy, politics, environment and climate change. Too often, young people appear in news stories only as victims or family members; or they are spoken about, but not listened to.

Media reporting on illicit drugs in Australia: Trends and impacts on youth attitudes to illicit drug use

Sources shared on Twitter: a case study on immigration

Digging for dirt in the digital age: the trouble with journalism and doxing