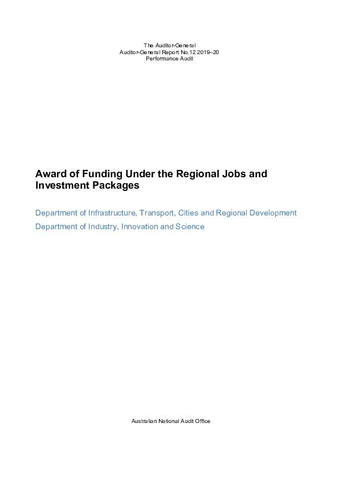 Award of funding under the Regional Jobs and Investment Packages

The Regional Jobs and Investment Packages (RJIP) is a competitive grants program that was established to drive economic growth and create jobs in 10 regions across five States:

The program originated from a 2016 election commitment to establish a $200 million program to deliver regional jobs and growth, with the expectation of leveraging a further $200 million or more in matched funding. The 2016 Mid-Year Economic and Fiscal Outlook separately identified a further $20 million Regional Jobs and Investment Package for the Latrobe Valley region. A further $2.3 million was transferred to RJIP from the uncommitted funds in the Tasmanian Jobs and Investment Fund.

Administration of the program is the responsibility of the Department of Infrastructure, Transport, Cities and Regional Development (Infrastructure). Infrastructure engaged the Business Grants Hub within the Department of Industry, Innovation and Science (Industry) to administer key aspects of the program. This included receipt and assessment of applications, and execution and monitoring of grant agreements. The assessment process was outsourced by Industry at a cost of $3.15 million to a contractor accessed under a standing deed for contact centre services.

Infrastructure administers significant grant funding including in areas such as regional development and cities and predominantly manages this funding through the Business Grants Hub. Outsourcing grants presents risks relating to assurance of quality, compliance and accountability. ANAO audit activity has also highlighted risks where assessment of grant applications does not verify the claims of applicants or ensure the assessment criteria are applied in full.

The objective of the audit was to assess whether the award of funding under the RJIP program was informed by appropriate departmental advice and that processes complied with the grants administration framework.

To form a conclusion against the objective, the ANAO adopted the following high-level criteria:

Award of a $443.3 million grant to the Great Barrier Reef Foundation

Management of the Regional Network

What the sports rorts scandal reminds us about health spending

Remembrance of rorts past: why the McKenzie scandal might not count for a hill of beans