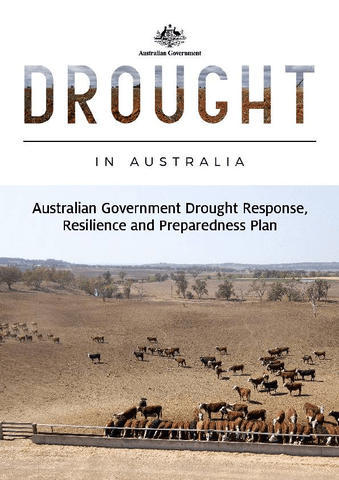 The Australian, state and territory governments, industry and individual farmers and businesses all have a role in responding to the current drought as well as preparing for future droughts and building resilience.

On 12 December 2018 the Australian, state and territory governments signed the National Drought Agreement (NDA), replacing the 2013 agreement. The NDA commits the Australian, state and territory governments to develop policies and programs that position farmers to plan for and manage risk; and prepare for, manage and recover from drought. It is in place until 30 June 2024 and will be reviewed approximately two years before expiry.

The Australian Government Drought Response, Resilience and Preparedness Plan (the Plan) is focused on three parts:

Australia's role in the Asian Century: the food bowl of a growing region?

Managing natural resources in a variable and changing climate

Reducing Vulnerability of Agriculture and Forestry to Climate Variability and Change: Workshop Summary and Recommendations