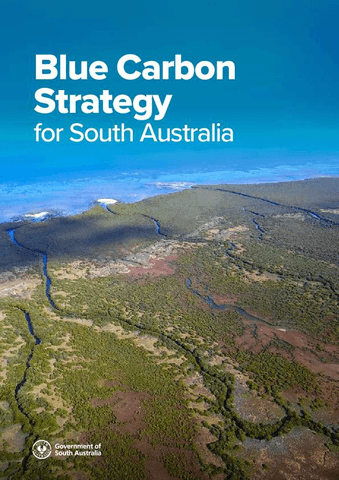 Blue carbon is the carbon captured and stored in coastal ecosystems including seagrass meadows, saltmarshes and mangroves.

These ecosystems are carbon sinks, accumulating and retaining carbon in the plants themselves and, significantly, in the soils below. Over 95% of carbon in seagrass meadows is stored in the soils. The total amount of carbon stored within blue carbon ecosystems is called carbon stock.

The strategy’s intent is that future blue carbon projects in South Australia be supported by carbon financing from blue carbon credits, developed under the Australian Government’s Emissions Reduction Fund. Since 2014, the Emissions Reduction Fund has provided financial incentives for Australian businesses and natural resource managers to adopt new practices and technologies to reduce greenhouse gas emissions. Projects accredited under the Fund can receive carbon credits for each tonne of carbon reduction achieved. Carbon credits can then be sold to create a revenue stream.

This type of carbon financing could potentially incentivise blue carbon projects in South Australia. However, at the present time, the methodologies to enable inclusion of blue carbon projects in the Fund are still being explored. As part of the Blue Carbon Strategy, the South Australian Government will seek partnerships with the Australian, State and Territory Governments and stakeholders in the scientific and business communities, to build the evidence base, and realise the opportunities, for including blue carbon under the Emissions Reduction Fund.

From climate pariah to climate saviour? Transforming the petroleum industry

Nature in the urban century: a global assessment of where and how to conserve nature for biodiversity and human wellbeing

Sunk costs: carbon capture and storage will miss every target set for it

30X30 In hot water: the climate crisis and the urgent need for ocean protection