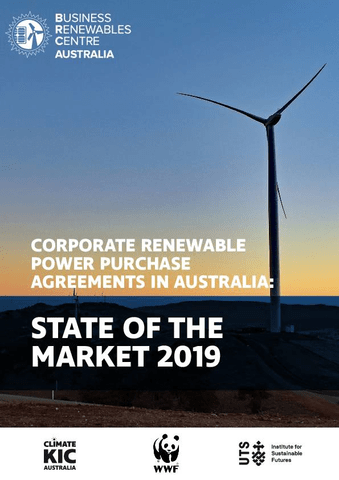 Over the last two years, the landscape of renewable energy in Australia has changed drastically. Renewables now make up more than one-fifth of Australia’s total energy output and are now the cheapest form of new build electricity generation. Much of this change has taken place amidst a national policy environment of sustained uncertainty and has largely been led by state and territory governments as well as the private sector. Now that the Renewable Energy Target has been fully subscribed sustained corporate leadership is as important as ever.

Corporate Renewable Power Purchase Agreements (PPAs) have been crucial in driving the energy transition in Australia and helping to realise the nation’s climate change targets. Since 2017, Corporate PPAs have contracted more than 2GW of renewable energy off-take from projects around the country. Increasingly, this rapidly expanding market has also witnessed growth in both the retail and wholesale sectors, as well as from mid-scale and aggregated buyer groups. These trends are a promising sign for the future of Australia’s corporate power purchase market.

The 2019 State of the Corporate PPA Market report provides an overview of the sector and its key trends. The original data in the report is drawn from two sources:

Can't stand the heat: the energy security risk of Australia’s reliance on coal and gas generators in an era of increasing heatwaves