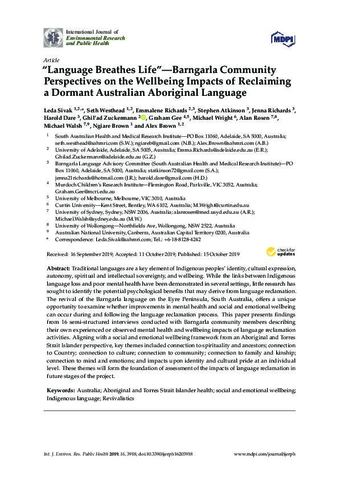 Traditional languages are a key element of Indigenous peoples’ identity, cultural expression, autonomy, spiritual and intellectual sovereignty, and wellbeing. While the links between Indigenous language loss and poor mental health have been demonstrated in several settings, little research has sought to identify the potential psychological benefits that may derive from language reclamation. The revival of the Barngarla language on the Eyre Peninsula, South Australia, offers a unique opportunity to examine whether improvements in mental health and social and emotional wellbeing can occur during and following the language reclamation process. This paper presents findings from 16 semi-structured interviews conducted with Barngarla community members describing their own experienced or observed mental health and wellbeing impacts of language reclamation activities.

Language is central to culture, and its loss is a source of grief for many. The main purpose of the Barngarla Language and Wellbeing Study is to assess the effectiveness of language revival in improving the mental health and social and emotional wellbeing of Aboriginal people across Eyre Peninsula.

Yarning up: stories of challenges and success