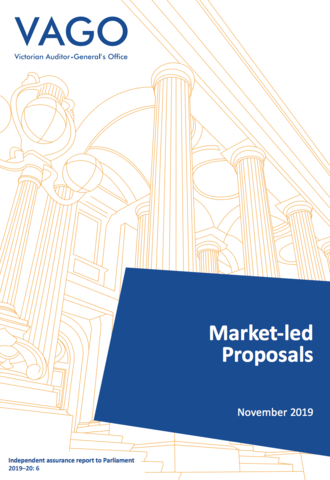 In a market-led proposal (MLP), the private sector makes an unsolicited approach to government for support to deliver infrastructure or services through direct negotiation rather than a competitive procurement process. The private sector usually asks the government for financial support, but may also ask for regulatory or other forms of assistance.

The state has considered many MLPs since early 2015, with 14 progressing beyond the second assessment stage and four successfully advancing through the entire process to contract award.

In early 2015, the government established a new guideline and five-stage process for considering MLPs and gave commitments:

The Department of Treasury and Finance (DTF) has a key role in overseeing the MLP guideline and the application of the assessment process. It leads Stage 1 and Stage 2 of proposal assessment in consultation with relevant departments. During Stages 3, 4 and 5, the government-approved lead department, which can also be DTF, undertakes the assessment. When another department or agency leads an assessment, DTF provides support.

The objective of this audit was to determine whether MLPs are assessed in accordance with government requirements. To address this, we examined the assessment of two MLPs that the government awarded contracts to—the West Gate Tunnel (WGT) and the Victoria Police Centre (VPC). We did not examine implementation of these projects. We also examined the assessment of one alternative proposal received for the WGT and two alternative proposals received for the VPC.