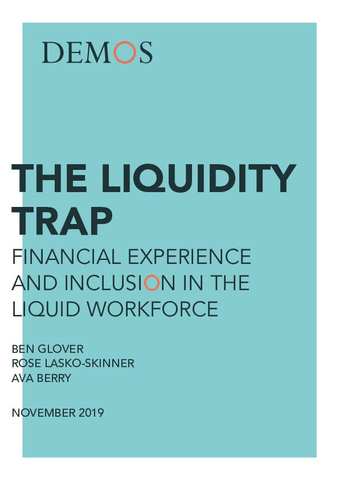 The liquidity trap: financial experience and inclusion in the liquid workforce

This report examines the financial security for the modern, liquid workforce.

The report finds that ‘liquid’ workers, such as gig economy workers and the self-employed face greater barriers to financial inclusion compared to traditional workers. They are less likely to hold financial products and are almost twice as likely (28%) to be turned down for financial products due to their employment history than traditional employees (15%).

The report calls for a package of solutions to improve financial security for the liquid workforce, including: a minimum wage, better financial services for people on flexible incomes, a more inclusive welfare system, measures to radically boost pensions take-up, and more support with financial management.

Labour platforms and gig work: the failure to regulate

Crafting the future of work: the big impact of microbusiness

Precarious jobs: Where are they, and how do they affect well-being?

What do we know about gig work in California? An analysis of independent contracting