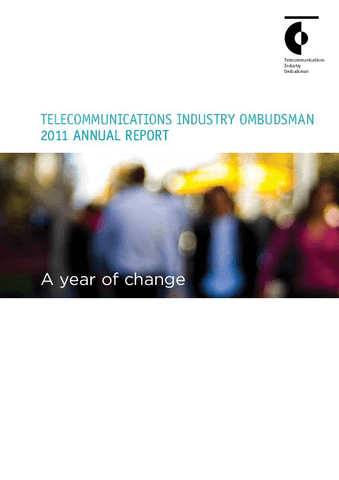 This year was the busiest on record for the Telecommunications Industry Ombudsman, which received 197,682 new complaints, an increase of 17.8 per cent.

More than half of these complaints – 112,376 – were about mobile phone services.

This report presents the activities of the Telecommunications Industry Ombudsman (TIO) over the past year.

• The TIO identified key issues related to smartphones, such as a 26 per cent increase in disputes about internet charges on a mobile service.

• The TIO responded to unprecedented levels of demand by introducing fair, efficient and environmentally friendly processes such as conciliation and email referral.

• The TIO continued to meet the needs of consumers who contacted us. The level of overall satisfaction with complaint handling was 93 per cent among consumers we surveyed in February 2011.

• The TIO were an active voice in the debate about customer service and complaint handling practices in the telecommunications industry. They made more than 20 submissions to public inquiries and reviews, most importantly the ACMA ’s Reconnecting the Customer inquiry, to highlight the ongoing problems in customer service in the telecommunications industry.

• The TIO became more accessible by reaching out to culturally and linguistically diverse communities, and visiting vulnerable consumers, attending more than 50 events and conferences around Australia.

• The TIO monitored over 100 systemic issues and directly intervened in more than 50 matters to avoid problems for large numbers of consumers.

• The TIO improved communications with all our stakeholders, by working on a new website, improving reports to service providers and simplifying complaint handling procedures.