Not without your approval: a way forward for nuclear technology in Australia

This inquiry commenced on 6 August 2019, following a referral from the Minister for Energy and Emissions Reduction.

The inquiry took place against a backdrop of three notable contextual features of energy policy:

The Committee considered 309 submissions and undertook a program of public hearings across the country from which it drew three key conclusions:

The report is published in three sections, with each section addressing one of the above-mentioned conclusions.

The report is supplemented by Appendix A, which provides background information and a summary of the evidence received by the Committee. 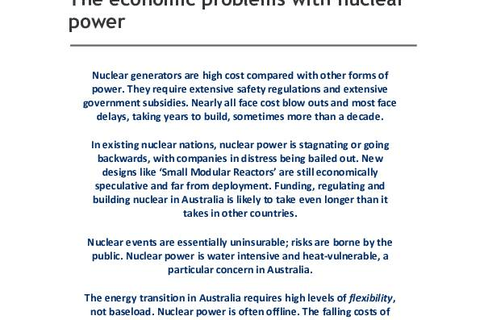 Over reactor: the economic problems with nuclear power

The changing geopolitics of nuclear energy

The impossible dream: free electricity sounds too good to be true. It is