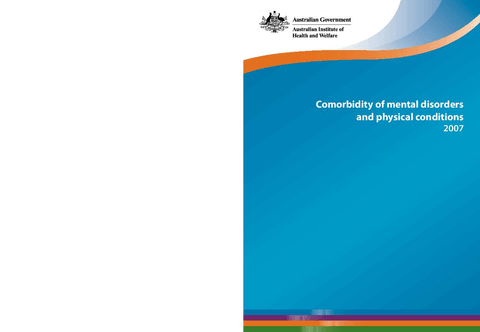 Comorbidity is the occurrence of more than one condition/disorder at the same time, and is common among those with mental illness. It can involve more than one mental disorder, or one mental disorder and one or more physical conditions. People with multiple disorders are more disabled and consume more health resources than those with only one disorder.

This report provides a snapshot of the prevalence of mental illness in association with common chronic conditions in Australia in 2007. It compares the comorbidity group—comprising 12% of the population aged 16–85—with three other groupings:

The results are all derived from the National Survey of Mental Health and Wellbeing 2007, conducted by the Australian Bureau of Statistics.

Around one in nine Australians aged 16–85 had a mental disorder and a physical condition at the same time. These people were more likely to be female, and aged in their early forties.

The coexistence of mental and physical conditions has an effect on quality of life. For example, on the Kessler Psychological Distress Scale 10, people in the comorbidity group were more than 10 times as likely to report high levels of psychological distress compared with the groups with no mental disorder.