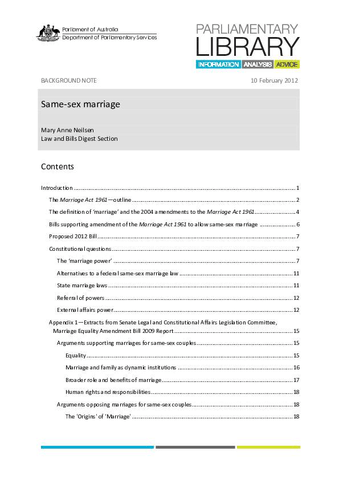 This paper provides background material for the parliamentary debate that is likely to follow the introduction of Labor MP Stephen Jones' private Bill supporting same-sex marriage.

Same-sex marriage has been on the political agenda in Australia for several years, as part of the broader debate about the legal recognition of same-sex relationships.The expansion of legal rights and protections afforded to same-sex couples in Australia is well developed at both federal and State level. For example, legislation now exists in four States and the Australian Capital Territory that provides for the legal recognition of relationships that may include same-sex unions. At the federal level, in 2008 and 2009 there was a wide-ranging suite of reforms to provide equal entitlements and responsibilities for same-sex couples in areas such as social security, veterans’ entitlements, employment, taxation, superannuation, immigration and workers’ compensation.

However there remains one significant area of difference between the treatment of same-sex and heterosexual relationships, and that is in relation to the institution of marriage. While there are fewer and fewer rights and obligations attached to married couples which do not attach to de facto couples – a status currently encompassing same-sex couples in most legal contexts— supporters of gay rights argue this is not enough. They say civil unions and domestic partner registries are not sufficient and for true equality, same-sex couples must have the right to marry. The concept of same-sex marriage is both complex and controversial. It raises human rights and constitutional law issues, as well as a raft of social, religious, moral and political questions.

Chronology of same-sex marriage bills introduced into the federal parliament: a quick guide