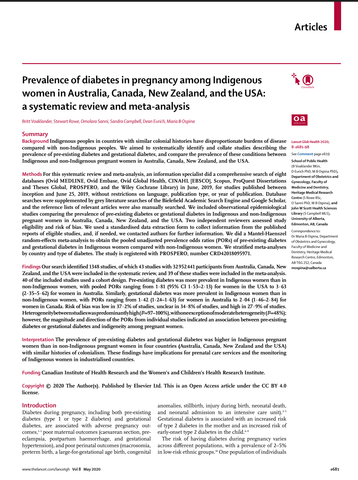 Prevalence of diabetes in pregnancy among Indigenous women in Australia, Canada, New Zealand, and the USA: a systematic review and meta-analysis

Objective: This systematic review and meta-analysis provided a comprehensive assessment of the prevalence of diabetes in pregnancy among Indigenous women in Australia, Canada, New Zealand, and the USA.

Importance of study: These findings have implications for prenatal care services and the monitoring of Indigenous women in industrialised countries.

Influence of environmental temperature on risk of gestational diabetes

Diabetes: a pandemic, a development issue or both?

Lost in transition? Access to and uptake of adult health services and outcomes for young people with type 1 diabetes in regional New South Wales

Diabetes in pregnancy linked to poorer outcomes for mothers and babies

The health of Australia's males: a focus on five population groups