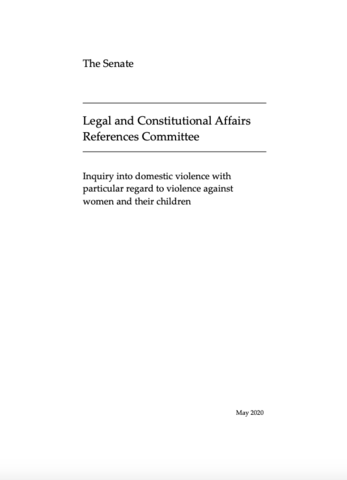 On 26 February 2020, the Senate referred an inquiry into domestic violence with particular regard to violence against women and their children to the Legal and Constitutional Affairs References Committee for report by August 2020. This report was delivered 3 months early and was prepared without holding public hearings or accepting submissions.

This report contains six chapters. The first chapter provides an introduction, information about the inquiry, and background on the National Plan to Reduce Violence against Women and their Children 2010-2022 (the National Plan).

Chapter 2 looks at the Senate Finance and Public Administration References Committee’s substantial 2015 report into domestic and family violence, including an analysis of the government’s response and actions taken in relation to the recommendations.

Chapter 3 looks at the Finance and Public Administration Committee’s subsequent 2016 report into domestic violence and gender inequality. The 2016 report did not contain formal recommendations, but made suggestions to ensure Australia’s response to domestic and family violence continued to include initiatives designed to challenge gender roles and stereotypes.

Chapter 4 reviews the Finance and Public Administration Committee report into the national domestic violence and sexual assault service, 1800RESPECT; particularly in relation to procurement processes and the contracting model.

Chapter 5 considers the findings of the Australian National Audit Office (ANAO) in relation to the administration of the National Plan by the Department of Social Services. This chapter looks at how the ANAO’s recommendations are being implemented as part of the Fourth (and final) Action Plan.

Chapter 6 presents the committee’s view on Australia’s efforts to reduce domestic and family violence under the National Plan, and proposes some questions for consideration in drafting the next iteration of the National Plan.