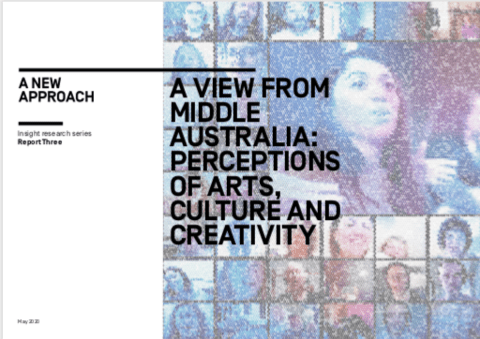 A view from middle Australia: perceptions of arts, culture and creativity

This report explores current attitudes to arts and culture amongst middle Australians, with a particular focus on swinging voters and marginal electorates in suburban and regional areas. It provides a window into the living rooms, workplaces and hearts of a group of Australians whose interests feature strongly in much of our political discussion and debate. This research finds that middle Australians are passionate about the role of arts and culture in their lives, and have clear views about the opportunities that arts and culture create for them, for their families, and for society more broadly.

This report comes at a strange time in Australia’s history.

Just weeks before COVID-19 was declared a pandemic, A New Approach (ANA) commissioned qualitative research to talk about arts and culture with “middle Australians”—that is, middle-aged, middle income swing voters from suburban and regional Australia. We wanted to know whether they valued arts and culture, if they made space for it in their lives, if they thought it was important to their kids and to society, and what they would and would not be willing to lose from the Australian cultural terrain.

The report draws on conversations that occurred during eight focus groups in February 2020, with men and women living in Brisbane, Melbourne, Sydney and Townsville.

Finding 1: Middle Australians consider arts and culture to be essential to the Australian way of life; without them, Australia would be like authoritarian or war-torn nations. The value of arts and culture was expressed through two key themes: 1) creativity, imagination and inspiration; and 2) participation, belonging and community.

Finding 2: Using “arts and culture” together, rather than “arts” or “culture” separately, broadens middle Australians’ emotional response and evokes a wider range of imagery. The word “arts” alone prompts imagery of the high arts, which are seen as elitist and as being more for other (wealthier) people, not them.

Finding 3: Middle Australians directly connect participating in arts and cultural activities with experiencing better mental health, as well as with improved creativity and lateral thinking in the workplace.

Finding 4: Middle Australians believe arts and culture help bring communities together, break down barriers between different groups within society and encourage greater communication. Participating often means opportunities to socialise with friends and family. Consequently, the most valued activities involved attending and participating in local activities, such as festivals, live performances and local libraries.

Finding 5: Middle Australians believe that children develop better when broadly exposed to arts and culture both in and out of school time. Arts and culture help children to: enhance their self-esteem; find new ways to express themselves; build social and intellectual skills; and prepare for the future—both socially and in terms of their career opportunities.

Finding 6: Middle Australians are not consistent in what boundaries they place around activities that can be categorised as arts and culture. They recognise that different people have different definitions and values in this area, and are generally comfortable with this. This extends across generations, with parents acknowledging that their definitions of arts and culture are narrower than their children’s definitions, and that what they value does not always align with what their children value.

Finding 7: Middle Australians believe that Australian content and cultural heritage icons should reflect Australians’ (all Australians, in all their diversity) stories back to them, while also being an important tool for representing Australia on the world stage.

Finding 8: Middle Australians are largely unaware of the contributions that arts, cultural and creative activities make to the economy, including to employment.