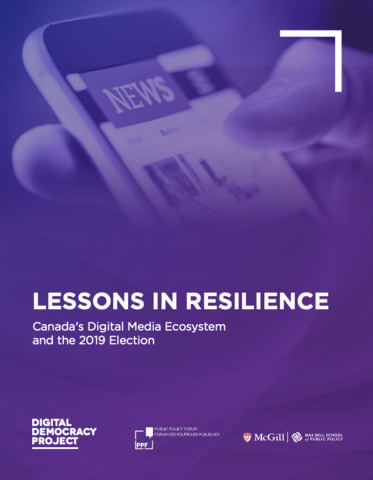 Researchers, policy-makers and the public at large are paying more attention to the threats that disinformation and other forms of online media manipulation pose to democratic institutions and political life. Starting with the Brexit referendum and United States election in 2016, and building through the European Parliament elections in 2019, concerns about co-ordinated disinformation campaigns organised by state or other actors, automated social media accounts (“bots”), malicious and deceptive advertising, and polarisation enhanced by algorithmic “filter bubbles” have reached an all-time high.

The Digital Democracy Project (DDP) was set up to help build the international evidence base on the impact of these trends with a robust Canadian case study whose methods could be applied in other locations. The project consists of three phases. The first was a two-day workshop for journalists about disinformation threats, held in May 2019 in Toronto. The second, and the focus of this report, was researching and monitoring the digital media ecosystem in real time ahead of the Canadian federal election on Oct. 21, 2019. The third and final phase, beginning in early 2020, will involve further research and consultations with experts and public representatives to develop policy recommendations.

Overall, the findings suggest the Canadian political information ecosystem is likely more resilient than that of other countries, in particular the U.S., due to a populace with relatively high trust in the traditional news media, relatively homogenous media preferences with only a marginal role for hyper-partisan news, high levels of political interest and knowledge, and — despite online fragmentation — fairly low levels of ideological polarisation overall. While we do find affective polarisation, which involves how individuals feel about other parties and their supporters, we find less polarisation on issues, which has been a key point of vulnerability in other international elections.

The role of technology in online misinformation 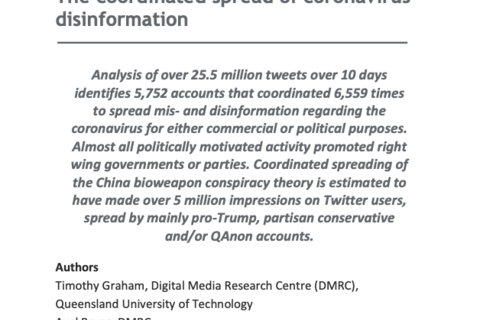 Like a virus: the coordinated spread of coronavirus disinformation