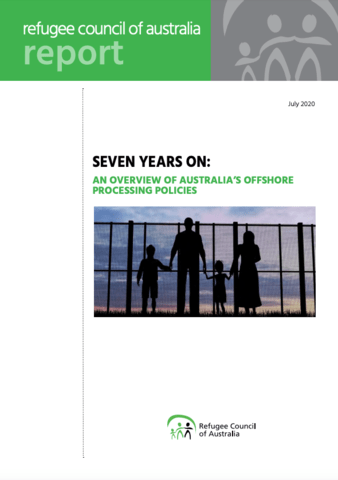 It has been seven years since 19 July 2013. On that date, the Australian government announced that anyone who arrived in Australia by boat to seek protection and was taken to offshore processing centres on Nauru and Manus Island, would never be resettled in Australia even if they were processed and recognised to be a refugee.

In the seven years since, the Australian Government has spent $7.6 billion for just over 3000 people and to maintain a harmful policy. The government justified it by stating that it ‘saves lives’ and stops people from drowning at sea. What it fails to mention is that our offshore processing policy is not saving lives – instead, we are killing people more slowly and more remotely, starving them of hope, and denying them a future.

The Australian government no longer provides regular statistics on offshore processing. So the Refugee Council of Australia worked to collect the latest information through the analysis of Senate Estimate, the documents released under Freedom of Information laws, budget papers, Operation Sovereign Borders updates and media reports.

This report provides a snapshot of where Australia is at, seven years after the 19 July 2013 announcement. The aim is to provide the key figures related to offshore processing policies: how many people have been sent offshore, where people are now, where they were from, how many returned or were forcibly removed, how many needed to be transferred to Australia for medical treatment, where in Australia they are now, and how much we have spent.