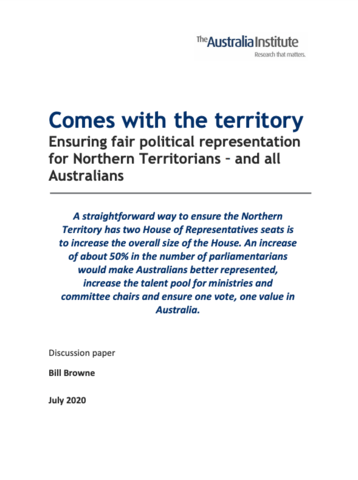 Comes with the territory

It is bad enough that there are 170,000 Australians per MP, but it is even worse that rounding the NT’s quota down would lead to 250,000 Northern Territorians for one MP.

The risk of NT representation falling dramatically exposes deeper problems in the distribution of MPs in Australia. Australia’s population has grown dramatically since Federation, but the number of MPs has not kept up – with no more MPs now than there were in the 1980s. This leaves all MPs responsible for ever larger electorates, and makes the under-representation of people in the Northern Territory particularly acute.

The extreme case of the NT also exposes the existing disproportionality in the distribution of MPs among the states and territories. As an original state, Tasmania has always received more MPs than its population would strictly entitle it to – while the smaller territories have been limited to what the quota, strictly applied, gives them. Due to rounding, this can leave the territories either significantly over- or under-represented based on whether they happen to cross a particular population threshold.

A simple way to address both problems would be to increase the size of the House of Representatives. Even a small increase would guarantee the NT’s second seat for the foreseeable future, but a larger increase would make MP allocations less “swingy” and address the problem of under-representation.