Are new technologies changing the nature of work? The evidence so far

In recent years, ground breaking advances in artificial intelligence and their implications for automation technology have fuelled speculation that the very nature of work is being altered in unprecedented ways. News headlines regularly refer to the ”changing nature of work,” but what does it mean? Is there evidence that work has already been transformed by the new technologies? And if so, are these changes more dramatic than those experienced before?

In this paper, the authors offer insights on these questions, based on the new research they conducted with their colleague Zhe Yang at Statistics Canada. Two aspects of work are under the microscope: the mix of work activities (or tasks) that constitute a job, and the mix of jobs in the economy. If new automation technologies are indeed changing the nature of work, the authors argue, then non-automatable tasks should be increasingly important, and employment should be shifting toward occupations primarily involving such tasks.

Most sociodemographic groups experienced the shift toward non-routine jobs, although there were some exceptions. For instance, the employment share of workers in managerial, professional and technical occupations increased for all workers, but much more so for women than for men. Interestingly, there was a decline in the employment shares of workers in these occupations among those with a post-­secondary education. The explanation for this lies in the major increase over the past three decades in the proportion of workers with post-secondary education, which led some of them to move into jobs for which they are overqualified.

It is important that policy-makers be informed of the evolution of the nature of work as new technologies are further integrated into the workplace, given the potential implications for policy development. This study has shown that, although recent advances in automation technologies have affected what workers do on the job and which occupations they work in, overall, the changes are not substantive. In other words, it may be premature to conclude that new technologies have altered the nature of work.

How computerisation is transforming jobs: evidence from the European Working Conditions Survey 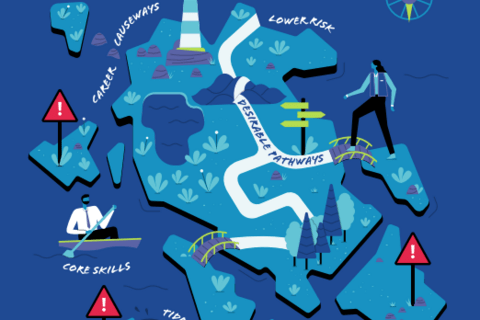 The demographics of automation in Canada: who is at risk?

Behind the headline number: why not to rely on Frey and Osborne’s predictions of potential job loss from automation

The future of work in America: people and places, today and tomorrow

Advanced industrial robotics: taking human-robot collaboration to the next level

Skills forecast: trends and challenges to 2030