Tell us what you think! Complete the 2021 Subscriber Survey and you can go into the draw to win one of: 2 pairs of AirPods, 3 My APO+ memberships, and a ticket to AIFS2022. 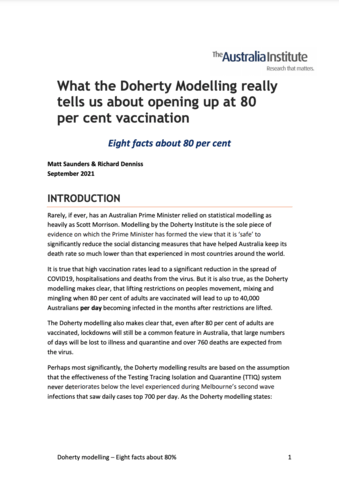 Rarely, if ever, has an Australian Prime Minister relied on statistical modelling as heavily as Scott Morrison. Modelling by the Doherty Institute is the sole piece of evidence on which the Prime Minister has formed the view that it is ‘safe’ to significantly reduce the social distancing measures that have helped Australia keep its death rate so much lower than that experienced in most countries around the world.

It is true that high vaccination rates lead to a significant reduction in the spread of COVID19, hospitalisations and deaths from the virus. But it is also true, as the Doherty modelling makes clear, that lifting restrictions on peoples movement, mixing and mingling when 80 per cent of adults are vaccinated will lead to up to 40,000 Australians per day becoming infected in the months after restrictions are lifted.

The Doherty modelling also makes clear that, even after 80 per cent of adults are vaccinated, lockdowns will still be a common feature in Australia, that large numbers of days will be lost to illness and quarantine and over 760 deaths are expected from the virus.

The fact that the Doherty modelling is based on a wide range of simplifying assumptions is not a criticism of the model, it is a truism. All statistical models, be they economic, climate or epidemiological, are based on assumptions which help users of the model to focus on the linkages between variables. But it is also a truism that when the assumptions in a model diverge significantly from reality the results of the model will be a poor predictor of what will happen in the real world.

The purpose of this paper is to highlight some of the assumption and less commonly reported but important results of the Doherty modelling. Different users will inevitably make different decisions about whether the simplifying assumptions made in the modelling are sufficient for realistic decision making purposes or not.