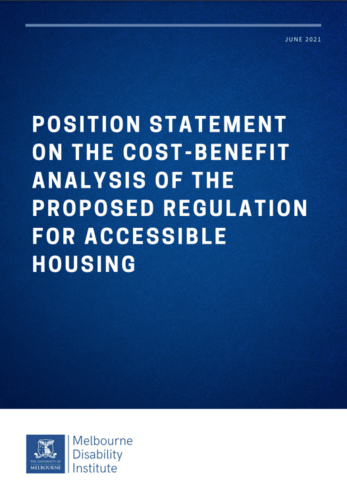 The Melbourne Disability Institute (MDI) welcomes the decision by Building Ministers on 31 April 2021 to incorporate mandatory accessible housing standards into the National Construction Code (NCC) at the Silver level from 2022 and to include the Gold Standard as a technical referral.

The decision will lead to major improvements in the quality of life for Australians living with disability and facilitate older Australians being able to age in place. It will make Australia a more inclusive and equal society.

Our aim now is to ensure all jurisdictions adopt the NCC as soon as practicable, so that all Australians benefit and there are maximum economies of scale and minimum transition costs.

Given that the decision of Building Ministers was not unanimous we are pleased to provide Position Statements on the CIE Final Report from Mr Andrew Dalton, Emeritus Professor Rob Carter and Associate Professor Ilan Wiesel for Ministers and the Australian Building Codes Board (ABCB) in support of the decision by a majority of Ministers.

• Mr Dalton and Professor Rob Carter remain concerned that the CIE Final Report continues to distort the economic merits of the proposed regulation. Their Position Statement reaffirms that when symmetry between costs and benefits is achieved, consistent with Office of Best Practice Regulation guidance, the benefits of mandatory accessible standards do exceed the costs. Their Position Statement also highlights that important benefits remain unquantified and/or undervalued in the CIE Final Report (e.g., benefits to the general population, productivity impacts, ongoing value of all housing space, value of a statistical life year). These weaknesses are compounded by the failure to present a succinct summary of all the qualitative evidence, aspects of which are fundamental to a balanced cost-benefit analysis.

• Associate Professor Wiesel in his Position Statement has reaffirmed that important qualitative factors have not been included in the cost-benefit analysis of mandatory accessible housing standards. His earlier report provided the most comprehensive survey results on the impact of inaccessible housing ever undertaken in Australia, including 1,187 survey responses and the results from 40 in-depth qualitative interviews. However, the CIE deemed that many critical qualitative factors were too difficult to quantify and monetise and so were not accounted for in their estimated ‘benefits’, while all ‘costs’ were monetised and included in their conclusion.

Furthermore, a synthesis of the qualitative factors deemed difficult to monetise was not presented in the report’s conclusions and weighed against the quantitative result. The failure to provide a synthesis of the qualitative evidence makes it far more difficult for decision makers to give these qualitative factors the consideration they warrant as recommended by the Office of Best Practice Regulation. These voices and thousands more must be recognised and included when assessing the full benefits as well as the costs of accessible housing standards.

MDI therefore reaffirms its earlier advice in support of mandatory accessible housing standards and believe that Building Ministers have made a decision that is strongly supported by the best available quantitative and qualitative evidence.

Proposal to include minimum accessibility standards for housing in the National… https://apo.org.au/node/315066

Economic advice prepared to assist with responses to the Consultation Regulatio… https://apo.org.au/node/315068