Skip to main content
We want your feedback! Complete the 2022 Newsletter Subscriber Survey and you can go into the draw to win: 2x $200 vouchers, 3x My APO+ memberships, and a ticket to EIS 2023.
Conference paper

After decades of planning for the “post-industrial” city, urban policymakers have begun to reconsider how production might once again be integrated with the urban fabric. This almost paradoxical policy shift rides a wave of optimism pinned to new forms of urban manufacturing in “high” (e.g., pharmaceuticals; aerospace manufacturing) and “low” (e.g., custom printing, set design, home furnishing) technology fields. Yet, it also reflects concerns over the increasing scarcity of central industrial land following longstanding urban policies geared toward higher-value housing, office space and consumption amenities for a “knowledge-based” economy. Between 2000 and 2018, 2,423 hectares of industrial land were rezoned in Melbourne, most of which were small parcels (<5 hectares) in inner and middle suburbs.

It is now well understood that these “post-industrial” forms of urban development exacerbate inequalities. In contrast, productive urban industrial districts hold potential for new business growth, greater economic diversity, and more inclusive employment and land use outcomes. This is particularly important in the context of Covid-19, which has severely impacted urban economies dominated by low-wage services and consumption jobs.

Despite enthusiasm for revived urban industrial activity, little is known about how these enterprises have adapted to changing land uses and property development in high-cost urban areas. We focus on these adaptations through interviews with urban manufacturers and cultural producers in Brunswick, a gentrifying suburb approximately 6 kilometres north of Melbourne’s central business district. Like most inner-city industrial suburbs, Brunswick experienced industrial restructuring through the 1970s and 1980s and the municipality has since faced considerable pressure from land owners and the State Government to rezone its industrial land for housing and transit-oriented development. While this poses considerable challenges for Brunswick-based urban manufacturers and cultural producers, these pressures have also acted as a catalyst for adaptation. If new production-oriented urban policies are to be successful, they must pay attention to emergent production strategies, producer networks, and workspace arrangements in inner-city industrial districts.

Creative clusters and innovation: putting creativity on the map 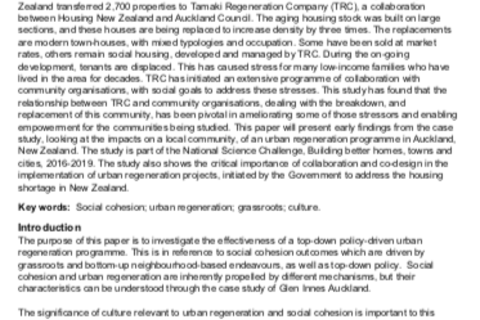 Melbourne Docklands: it's a class remake but it ain't classy

Gentrification and displacement: a review of approaches and findings in the literature (positioning paper)