The suburbs we need: establishing a national urban investment fund

Australia’s cities rank highly on global ‘liveability’ league tables. But how ‘liveable’ are 24 of the fastest-growing municipalities where more than three million Australians now reside? Over the next 20 years the population of these municipalities will grow at twice the national average bringing greater demands for infrastructure, public transport, health, education, and recreational services.

A major survey of residents in growth areas identified concerns in infrastructure planning and a lack public transport options and recreational facilities for young people. Residents want more health services and employment opportunities delivered closer to home. Securing a sustainable investment base for infrastructure in areas with fast-growing populations should be a major priority for the Federal Government.

If we are to create the suburbs we need for the future, a new partnership is required, drawing on the following approach:

• Consistent with the National Urban Policy framework, establish a COAG-led process to agree jurisdiction-specific targets for cities as a whole and for particular sub- regions, including, but not limited to, outer urban growth areas

• Establish a National Urban Investment Fund (NUIF) capitalised by the Commonwealth Government on a five-yearly cycle and with complementary funding from State and Territory jurisdictions to support additional investments.

• Consolidate existing urban-policy related initiatives (such as those announced in the 2011 budget) into the Fund with consistent criteria applied across all funding windows.

• Ensure a clear focus on the needs of outer urban growth areas with specific targets relating to improved access to jobs and services in these areas.

• Payments to be made on the basis of meeting pre-agreed performance targets subject to independent audit under COAG auspices.

The approach outlined reflects the National Competition Policy model of reform pursued across the last two decades. This model guaranteed a fair distribution of the productivity dividends that accrued from structural reform.

For the purposes of calculating the net benefits of the model we assume an initial Commonwealth investment of $12 billion over 5 years, rising to $20 billion for the second and subsequent 5 year periods.

Fixing the hole in Australia’s heartland: how government needs to work in remote Australia 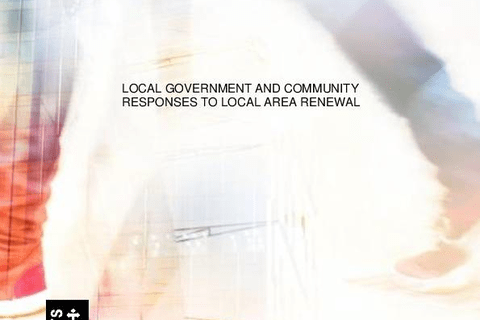 The Use of Density in Australian Planning