In December 2011, the Expert Panel on the Constitutional Recognition of Local Government recommended that a referendum be held to amend s 96 of the Commonwealth Constitution to allow the Commonwealth Parliament to make grants of financial assistance to ‘any local government body formed by State or Territory Legislation on such terms and conditions as the Parliament sees fit’. This recommendation was made subject to conditions, one of which was that the ‘Commonwealth negotiate with the States to achieve their support for the financial recognition option’.

This paper provides the information and analysis that will be needed to underpin those negotiations and ensure that they are conducted upon an informed basis. Chapter II explains the current status of local government under the Commonwealth Constitution. It is necessary to understand this before an assessment can be made of how the Constitution ought to be changed.

Chapter VI addresses the current campaign for the constitutional recognition of local government. In particular, it provides a critique of the Final Report of the Expert Panel on the Constitutional Recognition of Local Government. It assesses submissions made to the Panel as well as the Panel’s findings. It concludes by providing a more in depth analysis of the potential effects of the proposed amendment upon the federal system as well as the financial implications of such a referendum. 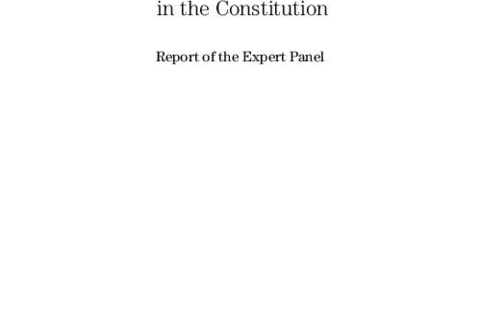 A new federation with a cities and regional approach