Developing a label for excellence in design for urban sustainability

The thesis investigates the impact caused by urban development on the environment. In addition, the thesis proposes and tests a methodology and a prototype tool for assessing the environmental performance of urban environments.

The first section of the research briefly discusses some of the important environmental performance rating systems available on the market, such as USGBC-LEED, BREEAM, ISO 14000, NABERS and CASBEE. Their use for assessing urban developments is investigated critically. The thesis points out relevant flaws in the methods of these institutions, exposing a gap in knowledge of urban environmental assessment.

The next step of the thesis begins by considering some historical societies and their urban models in order to understand how those making urban developments have approached the environment and its limitations. Indeed, the analysis of these historical models was based on selected speculative aspects, since confirmed by the investigation, as being essential for an ecologically balanced society. The thesis dedicates a chapter to describing the impact caused by the progressive monetarization of ancient society on the relationship between the urban environment and nature. The chapter introduces a discussion about how money has interfered with and speeded up the process of job specialization in urban areas, and how it has been shaping urban areas today.

The thesis then reflects on important urban problems from an ecological point of view, pointing out relevant issues in modern urban development. Additionally, the research connects the problems of modern urbanism and the economics that have acted as a major force in shaping cities and their expansions.

Finally the research proposes a methodology for environmental assessment, based on the ecological footprint. The prototype tool developed puts together all relevant environmental aspects. It also includes personal habits, combining these with urban design, transportation, consumption and energy resources to measure the footprint impact. The research recognises that the footprint cannot be treated as a static number; therefore, the research also presents a second instrument, which calculates the biocapacity per capita, according to population and economic growth, serving as a numerical ecological parameter for the first prototype tool. This enables the environmental impact of proposed changes, such as urban growth, to be assessed.

A number of case studies using the tools are presented. These include three new urban developments which have a label for more sustainable urban design (LEED). The measurement prototype tool is also applied to some of the ancient societies previously studied, in order to compare the present urban and life style model with that of ancient urban societies. The thesis ends by comparing results from LEED for Neighbourhood Development with those of the new prototype tool, including comparison of modern and historical urban models.

Highway infrastructure: visions and challenges in the next decades 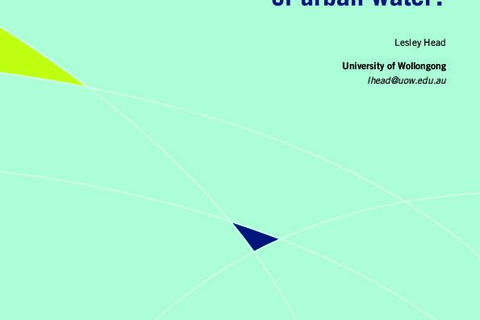 Have we changed our cultures of urban water?

Our cities, our future: a national urban policy for a productive, sustainable and liveable future