Turning around schools: it can be done

By examining two primary and two secondary schools, this report argues that Australia’s most troubled schools can turn around their performance to achieve remarkable results by following five steps.

Overview: Some of Australia’s most troubled schools are turning around their performance to achieve remarkable results. Formerly marked by behaviour problems, low expectations and poor staff morale, these schools are implementing reforms that make them models for all low-performing schools. These schools are thriving not just because their leaders are often inspirational, but because they have followed the same path as turnaround schools around the world.

Secondary schools that once struggled are also transforming. In 2006 more than two-thirds of Year 7 to 11 students at Sunshine College in Melbourne’s western suburbs achieved only primary school levels of literacy. By 2012, literacy and numeracy was improving at a faster rate than similar students across the nation. And in the three years to 2012, 40 per cent of Year 12 students at Holroyd High School in western Sydney took up university places. Over half of Holroyd’s students have been refugees.

These and other turnaround schools improve by consistently implementing the same five steps: strong leadership that raises expectations; effective teaching with teachers learning from each other; development and measurement of student learning; development of a positive school culture; and engagement of parents and the community.

But change is not simple. Despite many government initiatives, school turnaround is rare. Highlighting the five steps is important but not enough. For policymakers, the challenge is to trigger change in schools in each of the five steps; to change the behaviour and practices of leaders, teachers and students.

How can this be done? First, a method to commit all parties to reform low-performing schools is required. Second, school leaders and teachers’ capacity for change must be built. Evaluation and accountability should monitor and provide feedback on progress in the five steps to continually reinforce change. Accountability for student outcomes is always the ultimate measure but a simple focus on test scores won’t bring about the required changes in schools. The Empowered Management Program in Shanghai provides a good example of how policy can be designed to change practices in low-performing schools. A contract commits all parties to the process. Leadership and teaching skills are developed by learning from highperforming peers. Evaluation and accountability mechanisms continually measure and reinforce change in the school.

A focus on continually changing behaviours in schools and classroom is a marked change from many Australian education policies. But done well, it will make a huge dent in inequality and enrich the lives of the students who need it most. 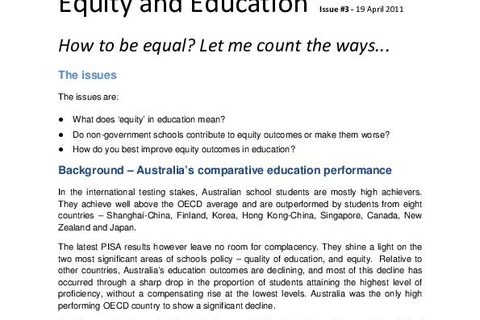 Equity in Australian schooling: an update

The shared work of learning: lifting educational achievement through collaboration

Regional divide? A study of income inequality in Australia

A headlong dash into the chasm of hyperbole

The heart of inequality

Clearing muddy waters: why Vinnies are wrong on inequality